Bluesman Michael Juan Nunez is 'About to Snap.' 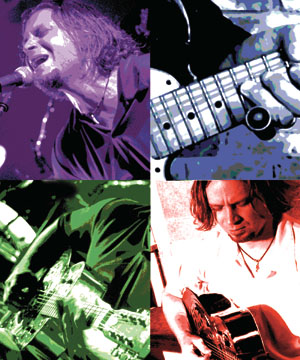 You can tell a lot about a man from the company he keeps ' and in the case of Michael Juan Nunez, it's a telling barometer of his talent. Nunez is most often found supplying guitar leads, harmonies and melodic solos for Roddy Romero & the Hub City Allstars, and his six-string prowess has also been tapped by Zachary Richard and blues legends Henry Gray and Harry Hypolite.

But Nunez is much more than a bandmate and gun for hire. His 2002 self-titled solo CD showcased Nunez' acoustic fingerpicking, and now his new CD, About to Snap, shows Nunez blossoming as a songwriter. He still mines archetypal blues imagery and metaphors (black cat bones, voodoo, jelly rolls) on kickoff tracks "Pack My Bag Blues" and "My Cadillac," but tracks like the pipeline worker's lament "Water and Steel" and the cooking comfort of "Mama's Kitchen" find Nunez creating an intensely personal brand of south Louisiana blues.

Guitar aficionados will find plenty to like on About to Snap, as Nunez deftly weaves a variety of textures (alternating between acoustic and electric) in ballads like "I Am No Saint" and the syncopation of "Donkey Donkey." The ultimate proof of Nunez' creativity and guitar wizardry is, ironically, the album's only cover song ' a scorching arrangement of the traditional blues warhorse "Rollin' and Tumblin'." Nunez recasts the brooding Muddy Waters-associated track with a heap of fuzz tones, distortion blasts and disembodied vocal effects that sound like a blast from a vintage transistor radio. Lafayette blues fans will want to tune in.

Michael Juan Nunez plays a CD-release party for About to Snap on Friday, May 20, at Grant Street Dancehall. For more info, visit www.michaeljuannunez.com.