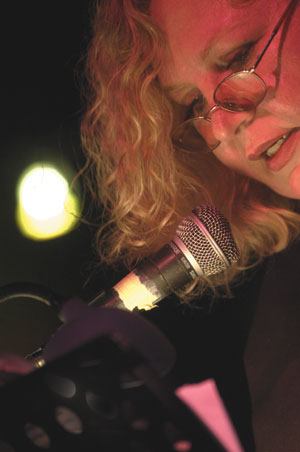 Like medieval troubadours wandering from location to location to recite their narrative poems, members of the UL Graduate Student Reading Series found themselves looking for a new venue when Chris' Poboys closed in December.

Fortunately, 307 Downtown owners Robert Guercio and Michael Delcambre are fiction fans. This spring, poetry recitations, creative non-fiction and short fiction readings, dramatic ensemble pieces and a little bit of comedy all take the floor in the back room at 307. UL creative writing doctoral students Patrick Crerand and Mike Jauchen stepped up to shepherd the series through its new season with a line-up of graduate students and faculty members as well as an invitation for the writing public to take advantage of the open mike. "It's important not to forget that literature does exist in common spaces," Crerand says. "We could do this at the university, but there is an ambience of place that makes it less formal, more communal."

Crerand and Jauchen decided to put a new spin on the performance aspect of the series, opening evenings with a little theatre. "Mike is the good host; I'm the evil host," Crerand says of their skits. "We're trying to make it humorous, warm up the crowd, offer theme songs for readers, get the crowd's attention."

While no one knows exactly when the reading series started, UL Creative Writing professor Jerry McGuire says it's at least 20 years old. The first presentations ' spontaneous, moveable plays created from overheard conversations at coffeehouses ' were called Eavesdrop Theatre. By the early '90s, the series found a home at Café 101 on Johnston Street, a notoriously grungy coffee house across the street from the university. Fast food pizzeria Papa John's replaced coffee and poetry, but the literary venture found a new home and identity at Chris' Poboys on Jefferson Street. Coffee was replaced by beer, and the crowd of literary cognoscenti swelled; Crerand expects no less at 307.

The UL Graduate Student Reading Series takes place weekly at 7:30 p.m. Thursday at 307 Downtown, through May 4.