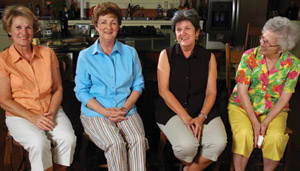 Conni Castille may be the first director ever to make a film about ironing. It's such an unlikely topic, when cinematographer and co-director Allison Bohl tells people what the documentary is about, they usually respond "Irony?" and Bohl has to pantomime ironing a shirt.

Shot in Breaux Bridge, I Always Do My Collars First: A Film About Ironing, follows four women ' Rookie LeBlanc, Gay Castille, Aunt Be Guidry and Georgie Blanchard ' as they talk about why they iron. And they iron everything: shirts, pants, underwear, sheets, pillowcases, handkerchiefs, even dish towels. "Many Cajun women grew up poor," Castille says. "It was a source of pride at a time they were growing up, in the 1930s and '40s, to keep your family clean and neat. These women take note of whose husband and children were allowed to go to church in wrinkled clothes." Quietly competitive, the women's stories are often humorous digs at their neighbors as well as fond remembrances of family occasions.

Castille and Bohl were able to collaborate because of the special nature of the workshop, which encourages students from all departments to experiment with digital media projects. Castille is in the master's degree program in folklore, and Bohl just graduated from UL with a bachelor's degree in visual arts. Neither woman had any training in documentary filmmaking before they began working on this project. Usually, a master's degree thesis is a scholarly paper. "By making a film, it let the women see themselves," Castille says. "They never would have read my paper."

Ironing as folklore will reach a much broader audience at the film's local premiere this week. It's only the beginning, Castille says. "Dishwashing's next, baby."

I Always Do My Collars First: A Film about Ironing, featuring a soundtrack composed of original music by Bonsoir Catin, Anya Burgess and Dirk Powell, premieres Sat. January 27 at 2 p.m. at the Bayou Bijou Theatre in the UL Student Center on campus. Admission is free. A reception immediately follows at the Paul and Lulu Hilliard University Art Museum. For more info, call 277-5292 or contact Castille or Bohl at [email protected].