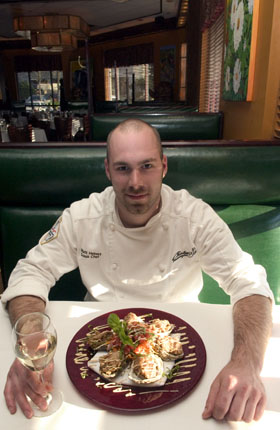 Charley G's sous chef Matt Hebert created his Pecan Encrusted Oysters as an appetizer about six years ago while working downtown at now-defunct restaurant, The Bank. "We were looking for an oyster dish, and I started playing around," he says. "I've carried it from place to place." Hebert's inspired oyster appetizer has graced the menu at Café Vermilionville, Nash's and the former Café Roux, before making its way into Charley G's appetizer selections about three months ago at the start of oyster season. Hebert's upscale version for Charley G's sells for $8 and includes Grand Isle oysters battered in pecan meal and flash fried, served on the half shell, with sweet potato frites, tomato and caper relish and finished off with cayenne pepper aioli. The texture of the crunchy coating is contrasted with the tartness of the capers and the cayenne pepper's heat, resulting in an appetizer that quickly became a hit. (It was featured in Southern Living while Hebert was working at The Bank.)

"I like upscaling classic dishes of the South ' the fusion of southwest flavors with Creole flavors," Hebert says. The 24-year-old chef has no formal training but has been cooking since the age of 14. He started off at Deano-O's Pizza, then moved to Café Vermilionville as a fry cook, The Bank as sous chef, and worked at Charley G's for the first time in 2001. From there, he went to Nash's and Café Roux, then moved back to Charley's last year when the café closed.

Whether they're fried, en brochette, or in the shell, oysters are always in demand this time of year. According to Patrick Banks, biologist in charge of the Louisiana Department of Wildlife and Fisheries' oyster program, oyster season is going well. "We've seen a nice-sized harvest already," he says. "Hurricane Ivan did set us back at the beginning of the season, but it has picked back up. Things are looking good so far." The months of September, October and November produced 1.5 million pounds of meat, Banks says, about $3 million worth of oysters. That's good news for Charley G's, which plans to keep its Pecan Encrusted Oysters on the menu through the beginning of April, when oyster season comes to a close.