Liz Webb knows a thing or two about events. The 30-year-old is, after all, the convention sales manager for the Cajundome. With a quick wit, great taste and brand of humor you'll find nowhere else, Liz is just the sort of bride we can't wait to watch unfold. Earlier this summer the spirited blonde got the ring during a trip to New York with her manfriend (that's right, she doesn't use terms like boyfriend), and now it's time to get down to business. Follow her at theind.com for an inside look at an engagement and wedding pulled together in 98 days, a wedding done a la Liz.

Liz Webb, 30, and Aaron Hebert, 32, president of Reliant Payroll and brand developer at Russo, have been dating for 3.5 years. This is their story.

We were set up on a blind date by a mutual friend (thanks again, Ann Aucoin). When he called me to ask me out and pick a night to go to dinner we had to schedule the date over a week in advance because our schedules just wouldn't coordinate.

Our first date was at Italian Market Restaurant in Lafayette where we sat for over two hours just talking about everything from our family, friends and jobs. The conversation was just so easy and enjoyable. He was all-around interesting and fun to talk to. At the end of the night he was dropping me off at my house, I asked if he wanted to keep the date going and go to a birthday party with me (yes, you did read that correctly I did actually have back up plans in case the date didn't work out). From there we went to a friend's party at their home and even though he didn't know a single person there, he threw himself into the group and had a great time. Since that night we have been together almost every day.

People tell you that when you meet the right person, you just know that they are the person you are meant to spend your life with. I think that we both just knew it instantly. We both have not been in a big rush to get married, and we have always had the mind frame that when the time is right we would know - we were really enjoying dating and didn't see the need to rush ourselves. Over the last few months we had begun discussing getting engaged and decided that we were both ready for that next step.

Two months ago, Aaron invited me to come along on a business trip for the Russo Group. We decided to go for Memorial Day weekend to spend the extra day in the city.  As fate would have it we start our weekend trip off with two flight delays due to weather and sold out flights. We spent the entire first day in the Atlanta airport. Having been 80 degrees in NY before we left, upon arrival we discover it is 40 degrees and raining. Needless to say, the weekend seemed to be working against us.

Aaron didn't know exactly when and where he was going to propose, so he spent the whole weekend waiting for the moment to present itself.  Finally, on the last day it stopped raining and the sun came out. 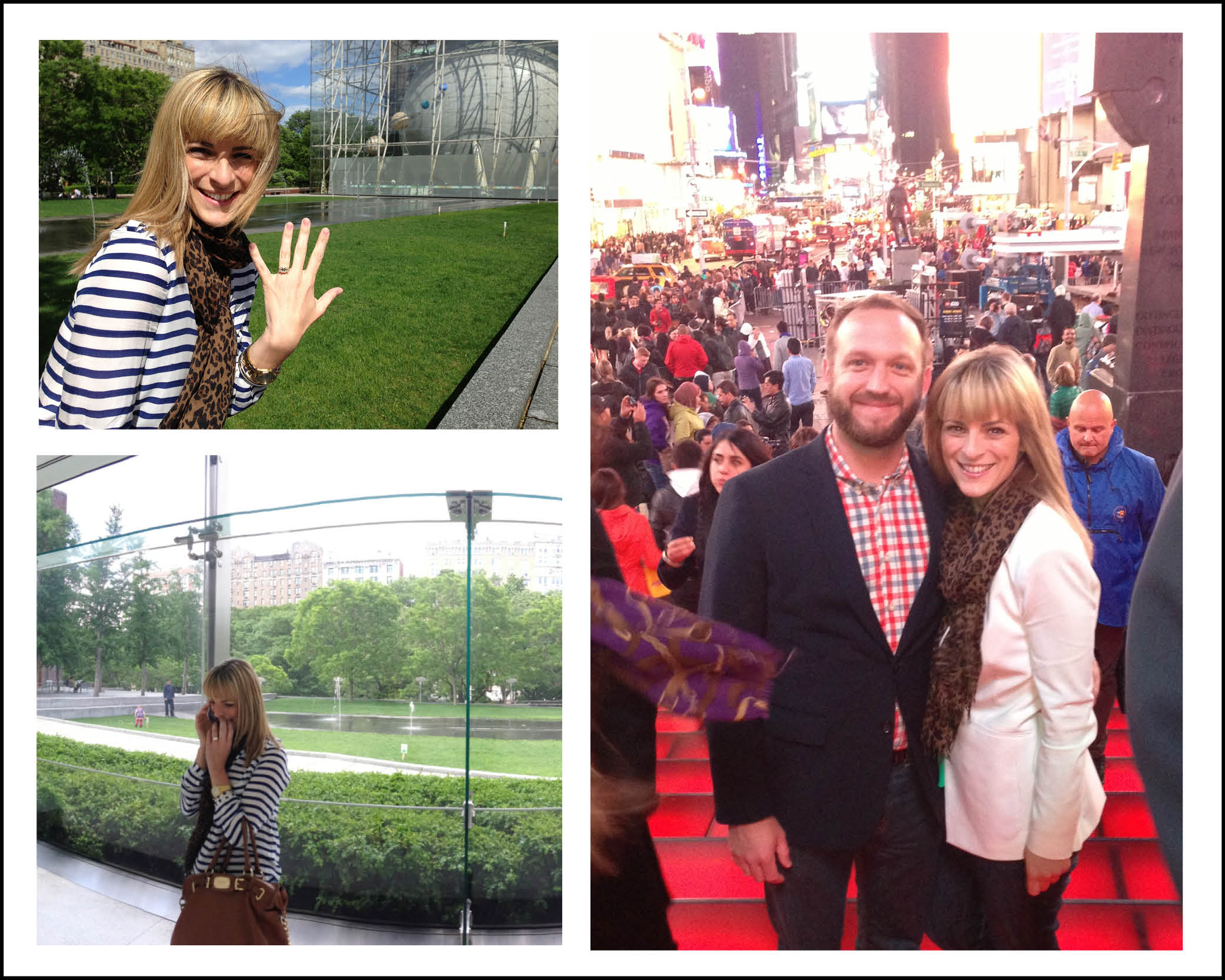 It was a beautiful spring day in the city. We thought a stroll through Central Park would be fitting. After walking for 2.5 hours in Central Park (later learning that he was scouting for the perfect spot for the proposal), we got into a battle of wills because we were so deep in the park that I thought he got us lost. I told him I was tired of walking and just wanted to go to the Natural History Museum. After touring the museum for an hour or so we took a break in the museum's really modern outside terrace. After a few moments, Aaron casually mentioned that he asked my dad for his permission to marry me at Easter. Confused, I asked why he hasn't asked me yet. At that moment he bent to his knee and told me he that he had been waiting for the right moment - this moment. What did he say after taking the ring out of his pocket? No clue, all I know is that I said YES and we quickly left the museum to celebrate!

My best friend told me that she had a surprise for us and that we should come by her house at six. When we arrived,  there were 20 of our friends and family outside cheering with sparklers and champagne in hand. Aaron and I told them our proposal story and we celebrated through the night. What a great way to return home.