A Buddhist lama's journey brings her to Lafayette. 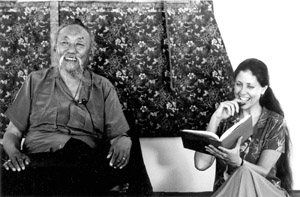 Lisa Leghorn didn't set out to become a Buddhist lama. She was working with battered women in the Boston area, trying to establish shelters and hotlines, when the stress of the situation took its toll. "I became angry and negative; I was becoming more of the problem than the solution," she says. "I felt like it was a spiritual problem. So I began looking for spiritual tools to help me learn how to continue to work with women with that degree of suffering while maintaining my love and compassion and not become so angry."

She quit her job, rented out her house and hit the road, searching without knowing what she was looking for. Her quest led her to Oregon, where she was sent to meet a Tibetan meditation master, H.E. Chagdud Tulku Rinpoche. "When I met my teacher, I felt that he taught the very hands-on practical tools for just how to do what I was looking for," she says. "I was so impressed that I said to him, 'There are so many people like myself, people who are working with battered women, or working for peace in their communities or in the world, or trying to make the world a better place, who are frustrated by their own limitations, just like I've been, but who wouldn't necessarily go to a Buddhist teaching. Either they aren't religious and don't want to be or they are practicing in a different religion and don't want to come, but these tools would be so helpful to them.' And so he said, 'OK, we'll just offer them in a nondenominational framework,' and that's how the Bodhisattva Peace Training was born."

Leghorn studied under Chagdud Rinpoche for several years, becoming his interpreter (his strong Tibetan accent is difficult for Westerners to understand) and traveling with him when he taught. In 1996 he conducted an ordination ceremony, and Leghorn became Lama Shenpen Drolma, Buddhist priest and teacher.

Lama Shenpen Drolma, who will be presenting a lecture and teaching this weekend in Lafayette, explains that someone following the Buddhist path makes a commitment to bring about the end of suffering and establish a state of unending happiness for every living being. In order to give rise to that level of love and compassion, she teaches how to develop those positive qualities of mind, how to practice them in our daily lives, deepen them and ultimately actualize them. "Everywhere there is conflict," she says, "participants can reduce their own part in the conflict and become more able to help create harmony and peace."

Lama Shenpen Drolma will be teaching Bodhisattva Peace Training in Lafayette Dec 1-3. A lecture, "The Importance of Pure Motivation in Benefiting Others," from 7-9 p.m. Dec. 1, at the Clifton Chenier Center is required to participate in the weekend teachings at the Katog Choling Dharma Center. For more info, call 288-5492.