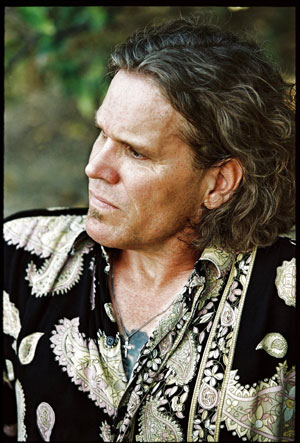 exas singer/songwriter/drummer Doyle Bramhall may not be a household name, but he's one of the cornerstones of the contemporary Texas blues scene ' and was one of the biggest influences on late legendary guitarist Stevie Ray Vaughan. Bramhall first played with Vaughan in '70s Austin band The Nightcrawlers and grew especially close to Vaughan after both men overcame addictions and channeled their experiences into song. Their late-80s songwriting output was the most fruitful period of Vaughan's career, yielding songs such as "Tightrope," "Wall of Denial" and "The House is Rockin'." Bramhall's singing was also a huge inspiration to Vaughan, with the guitar hero's vocal timbre and phrasing remarkably similar to his colleague's. The ultimate symbol of their partnership is Bramhall's life-affirming composition "Life by the Drop"; Vaughan's version of the song was released on his posthumous 1991 album The Sky is Crying and remains a testament to Bramhall and Vaughan's worldview.

Bramhall's no stranger to Acadiana, after years of touring the Gulf Coast circuit with the likes of Marcia Ball. In recent years he's found a new songwriting collaborator in Lafayette guitarist/singer/songwriter C.C. Adcock, a partnership that's yielded dividends for both men. Bramhall has played drums for Adcock much of the last year, and Adcock is co-producing Bramhall's brand-new album due out in August.

Their Crossroads show will be nothing less than a Texas and Louisiana roots-music summit, mixing up loping Texas blues shuffles with swamp rock and all points between. As an added bonus, expect both men to trade off vocals and play a number of new songs that haven't been released yet.

Doyle Bramhall and C.C. Adcock play the Sliman Theater in New Iberia on Wednesday, Feb. 15, and Vermilionville on Thursday, Feb. 16. Showtime for both shows is 7 p.m., and tickets are $10. For more info or to purchase tickets, call 233-7060.