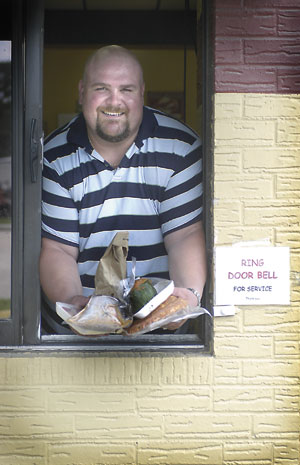 Tiny Prudhomme, great-nephew of Chef Paul Prudhomme, was looking for a location for his House of Meat butcher shop when he found a former Subway just off U.S. Highway 90 in Broussard. He liked the quaint town, known for its Boudin Festival, and he liked the easy access the four-lane afforded customers. But what was he going to do with Subway's drive-thru?

Smoked sausage, homemade tasso, stuffed chicken and quail, marinated rabbit, stuffed mushrooms and bell peppers, seasoned pork chops, boned and rolled roasts, rib-eyes, T-bones and filet mignons are all in Tiny's meat counter, but now customers don't have to get out of the car. Call in an order or pull up to the window and recite your grocery list. Barbecuing? House of Meat is a one-stop for ground meat, seasoning, sauce and even 10-pound bags of charcoal Tiny will hoist through the drive-thru.

Prudhomme says he didn't learn to cook at his famous great uncle's knee. "I learned from my parents," he says. At family reunions, Tiny made the boudin and cracklins. "Uncle Paul would bring in three or four chefs, and they'd make everything ' tables and tables of all kinds of food." Tiny headed in the other direction, keeping his cooking basic. There's a truckload of car food available at the drive-thru: beef jerky, cracklins and jalapeno poppers constitute one-handed driving options. And then there is the most ubiquitous offering, now made more convenient than ever. "We sell a lot of boudin for breakfast, and the coffee is free," Tiny notes. Drive-thru boudin, as Tiny's slogan says, "Getcha Sum N Go."