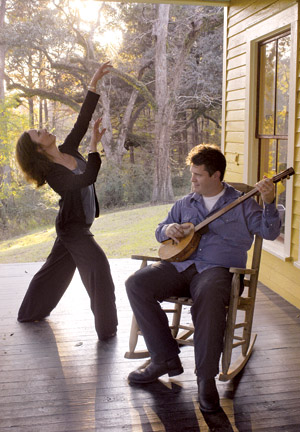 One of the things I love most about Southwest Louisiana is the wealth of world-class artists who lead normal everyday lives here ' painters who are as likely to be found on a ladder scraping trimwork as in front of an easel, musicians who can be seen on the big screen one minute and jamming for a few dozen people at a small club the next, and even famous chefs flipping out over plate lunches at the corner store. The lines that exist in so many parts of the country ' between "fine art" and "folk art," between professionals and amateurs, between the average person and the so-called "patron of the arts" ' are largely missing here.

A perfect example occurred at the annual night-before-Thanksgiving dance that my band, Balfa Toujours, shares with Geno Delafose every year. It was a night of Creole and Cajun music in which turkeys and guinea hens were given away as door prizes. While Geno was playing, I went to look for my friend Beverly Spell of Ballet Acadiana ' a world-renowned ballet teacher and choreographer ' only to be told that she was out on the floor doing zydeco moves with a world-renowned performer and teacher of Irish traditional dance. Do such things happen everywhere? Not a chance.

Beverly is a local artist who continually exhibits a humble and productive dedication to art. She creates on many levels. Her original choreography explores the emotional depths of the art form, her ballet barres, created from an original design and handcrafted in Milton, can be found in studios and schools around the world, and her teaching skills have landed her positions in New York and other dance meccas. But her dedication to the creative spirit is perhaps best exhibited in the work she does with young people. Her Leap 'N Learn program, which focuses on creativity, self-expression, and fundamental movement skills in children, is used by more than 400 dance studios throughout the world and has just been adopted by Lafayette Parish public schools. I'm collaborating on this program with Beverly and Annie Spell, through the addition of original "warm-up" and "cool-down" music that features local sounds like accordions, fiddles, triangles and zydeco-style electric guitars.

After working with Beverly on this and other projects, including an upcoming original ballet centered on Louisiana's wetlands, we discussed the idea of my participation in Ballet Acadiana's annual holiday celebration this December. She asked me to submit musical material to pair with original choreography for the performance. I immediately thought of a personal recording I had made a few years before of Christmas music on fretless banjo.

In the mid-1990s, I was working on a documentary film covering early Irish immigrants to the Appalachian Mountains. While doing research on my roots in the area, I learned of a fiddle belonging to a distant cousin which was assumed to have traveled to Virginia with my great-great-great-great-great-great-great-grandfather in the 1700s. Thinking only of what might make for a strong scene in the documentary, I made a call to the owner of the fiddle, whom I'd never met, and suggested that I bring the crew over to film me playing the instrument. In a response that still makes me smile at my presumptuousness, my 82-year-old cousin Alfred replied, "Now hold on a minute. You've got to get in on the ground floor!"

His words made me realize that I was acting in opposition to the principles of family and heritage that I had been hoping to illustrate for the film. I'd wanted to come to his home and get some quick footage of "the moment" before ever having met him. If the ties I was hoping to emphasize were so important, why was I prepared to relegate them to secondary status? Why was I more concerned with the image of family than with family itself? His lesson resonated with me then, as it does today, and I soon made plans to go visit him and his wife, Mary, without a film crew or an agenda. After a few visits we became close and I spent time with them every time I was in that corner of Virginia.

About a year later I came home one day near Christmas and found a large box on my porch. Inside were two handmade fretless banjos that Alfred had carved for me himself. They were decorated with horses and my name had been written on one by the bridge. I was so moved by his generosity that I immediately went inside and recorded an album's worth of Christmas music on the instruments. I sent a copy of this recording to him the next day and, surprisingly, he seemed as delighted with my gift as I had been with his.

I dubbed the recording A Fret-Free Christmas and began giving it to a few friends and family each winter. The performances seemed to have an extra depth and innocence because they were made with no motivation other than reflecting and furthering the spirit of generosity shown in the original creation of the instruments. While giving for the sake of giving is what we all want Christmas to be about, we often end up distracted by details and expectations. A Fret-Free Christmas was intended to follow Alfred's lead in returning the focus to what really matters.

Ballet Acadiana's Assistant Director Esther Burley responded to these feelings in the music and created powerful original choreography for five of the pieces as a suite. This brand new work features the Senior Company of Ballet Acadiana and live performances of the music on the original fretless banjos. The instruments have rarely been on stage, due to their delicate nature, and these interpretations of traditional Christmas pieces have never been performed in public. A limited release of the recording, including 18 Christmas pieces, will be available at these performances only, with a portion of the proceeds going directly to Ballet Acadiana. In addition to A Fret-Free Christmas, several other works will be performed, including the original ballet The Littlest Angel.

I'm proud to live in a community where art is intertwined with everyday life. In some ways we may take it for granted, but perhaps that's not as bad as it sounds. It has been granted to us, like a blessing, and we live in the thick of it, without separation. We rarely take a break and view it from the outside, but why should we? We're too busy doing it to step away. Beverly Spell and Ballet Acadiana are some of the busiest and most dedicated of the highly talented artists in this area. It's my hope that you'll join us to celebrate our many blessings during this holiday season.