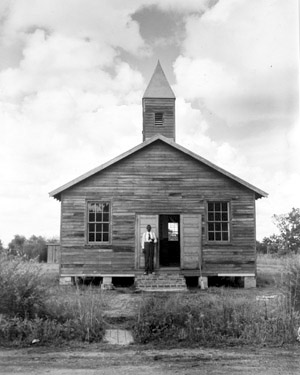 Elemore Morgan Jr. still spends his days out in the fields of Vermilion Parish armed with acrylic paint and Masonite boards, depicting the land he sees around him. The 74-year-old retired art professor and Baton Rouge native works every day the weather allows him.

The younger Morgan inherited his endless drive and determination to document the world from his father. The elder Morgan was an accomplished photographer known for his work with the state's oil and timber industry, as well as his eye for local architecture and folklife. Now their work will be exhibited together for the first time at The Ogden Museum of Southern Art in New Orleans.

"Often what [Morgan Sr.] did for himself was different than his jobs that provided his livelihood," says David Houston, the Ogden's chief curator. "He didn't give up his love of rural and folk culture for some view of progress in the future. He simply embraced both views ' as two sides of the same coin of the world in which he was living."

Both men's work has been featured in numerous exhibitions but never before in a joint retrospective. Morgan Sr.'s work shown at the Ogden features some 45 photos taken throughout his life, and Morgan Jr.'s work will include approximately 80 pieces from his trademark landscape paintings and early sketches from high school to work from his recent travels across the country.

And despite working in different mediums, the exhibit strives to show the two men have more in common than just their names.

"Both of them have left a real wake in the state and the region by their work," Houston says. "What they do is document place and time while doing it through their own personal vision. Here are these two people doing very solid work, in a place, reflecting that place, and not buying into some idea of art being an abstract universal language, but rather saying it's something specific: 'It's about me, and it's about where I am.'"

The Ogden Museum of Southern Art in New Orleans will unveil five new exhibitions, including Art and Life in Louisiana: Elemore Morgan Sr. and Elemore Morgan Jr. on Saturday, April 1, with a special opening event held at the Stephen Goldring Hall from 6-8 p.m. The April 1 opening is free and open to the public, and Elemore Morgan Jr. will be in attendance. The Ogden Museum of Southern Art is located at 925 Camp St. in New Orleans. For more information, call (504) 539-9600 or visit www.ogdenmuseum.org.