Kody Chamberlain depicts Beowulf and Grendel in a new version of the archaic tale geared for young readers. 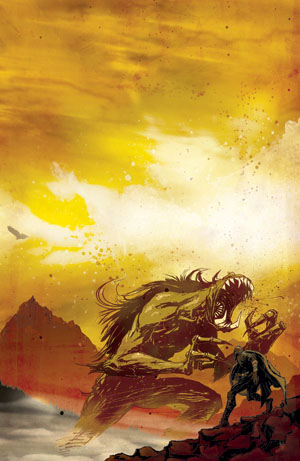 In his downtown Lafayette office, behind a door with a small placard that reads "Sweet 3," illustrator Kody Chamberlain sits behind a desk with a built-in light table. The room is filled with computers, comic books, a drafting table and a foosball table. One wall is covered in cork board and tacked index cards, detailing a story in the works. "I read Beowulf in high school," he says, "and I remember it being a pretty cool story."

Chamberlain was approached by the book publisher HarperCollins to illustrate an a graphic novel version of Beowulf written by Stefan Petrucha. "I thought this adaptation was really good," Chamberlain says. The oldest epic tale in the English language, penned around 700 A.D. by an anonymous author, tells the story of the hero Beowulf who battles to free the Danes from the clutches of the monster Grendel.

"I really liked the idea that the publishers were targeting young readers," Chamberlain says. "Everything I've done so far has been geared for adults. But this story's not dumbed down at all. I still think adults will dig it."

While the film version is already being touted for its digital motion capture approach to the story, Chamberlain approached his subject in a more modest manner. "I wanted to try to simplify my style in my storytelling," he says. It took him four months to illustrate the 96-pages. "I wanted to focus on the core ' the storytelling and the pacing ' and not so much on the rendering."

Beowulf retails for $8.99 and is recommended for ages 8-12. It's available locally at Acadiana Comics, And Books Too, Barnes & Noble, and Books-A-Million. For more information, visit www.kodychamberlain.com.