The Saints donned full pads for the first time Sunday - and that was when safety Kenny Vaccaro, a first-round draft choice, began to distinguish himself with his "reckless" style. 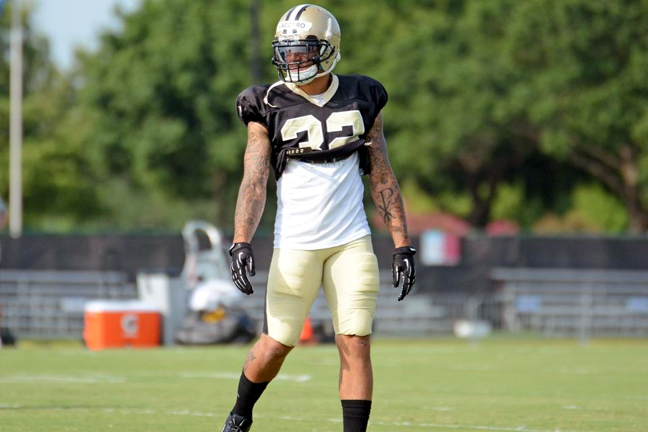 METAIRIE, La. (AP) - First Kenny Vacarro wrestled the ball from Jimmy Graham while the pair rolled on the ground following a simultaneous catch. Then the rookie safety brazenly tossed the ball off the star tight end's head.

Later, Vaccaro collided with Pierre Thomas at full-speed, flattening the veteran running back during 11-on-11 drills that were not intended to involve full tackling.

And that was just during one practice on Tuesday.

"That's just the way I am. I have a physical nature. If anything you have to slow me down before you speed me up. I approach every practice like that and it's not going to stop until somebody says, 'Hey, relax,'" Vaccaro said. "Every team needs a guy that's going to be like that - a little craziness, a little edge to him."

The Saints, who reported for training camp Thursday, donned full pads for the first time Sunday - and that was when Vaccaro, a first-round draft choice out of Texas, began to distinguish himself with his aggressive, contact-embracing style.

Vaccaro and fullback Austin Johnson took a few swipes at one another that day. Vaccaro also grabbed running back Tavares Cadet by the shoulder pads and threw him to the turf following a short catch.

"I just go out there and play. I understand that you want to be a pro ... but at the end of the day you've got to establish your role," Vaccaro said after Tuesday's practice. "Now that we've got the pads on, I really want to show what I bring to the team."

The Saints selected Vaccaro 15th overall out of Texas because they liked his combination of toughness and speed. They hope he'll not only thrive in pass coverage but also add an intimidating presence to the back end of a defense that gave up more yards last season (7,042) than any defense in NFL history.

"At some point it's not about X's and O's. It's about toughness, your physicality and he has shown that day in and day out," Saints linebacker Jonathan Velma said. "The physicality you can't teach. But for him to bring it like that every day, it's been very impressive."

Sometimes, Vaccaro's antics seem to agitate offensive players. Graham responded to having the ball tossed off his head by turning and starting back toward Vaccaro before veteran free safety Malcolm Jenkins stepped between them.

Graham later said he and Vaccaro are fine. Of their tussle, he said, "I'm not worried about that," adding, "It was a first down," meaning Graham thought he'd established possession and was down before Vaccaro ripped the ball away.

"It almost turned into a brawl, but we're both cool," Vaccaro said. "We understand that we're just competing and sometimes things get heated.

"I understand Jimmy Graham's arguably the best tight end in the league," Vaccaro continued. "He makes me so much better. I don't think some of the tight ends I'm going to face are going to be as good as Jimmy Graham."

When asked about Vaccaro throwing Cadet to the turf Sunday, head coach Sean Payton said the Saints don't want to see players being thrown to the ground in practices which do not involve full tackling, and that when rookies are trying to make an impression, they need to do it "the right way."

However, Vaccaro said Payton has yet to scold him directly.

"If coach Payton comes to me and says, 'Kenny, chill,' I'll stop," Vaccaro said, but then added he wasn't surprised that neither Payton, nor defensive coordinator Rob Ryan, nor any other coach, for that matter, had asked him to dial it back.

"Why would you after last year?" Vaccaro said. "Nobody's said anything. Offensive guys obviously don't like it. I think Rob loves it."

Secondary coach Wesley McGriff said coaches have been pleased with Vaccaro's development mentally and physically. One thing McGriff said he doesn't want to do is "take away from any one kid's aggression."

"These are world-class athletes. They're here to win football games. You've got to let them play," McGriff said. Vaccaro "comes on the field with the same attitude every day. He's ready to play. He's so energetic. The thing we tell him is: 'Maintain that every day.'"

Notes: Velma was limited in practice and had stitches across the bridge of his nose, which he said resulted from a hard collision with RB Mark Ingram at practice on Monday. ... LB Curtis Lofton did not participate in any drills because of back soreness, though Payton stressed, "He'll be fine." ... Payton said reserve outside linebacker Martiz Wilson should return in two to four weeks after dislocating his left elbow during Monday's practice. Payton said Wilson will be fitted with a brace when he returns. ... The Saints made one roster move, cutting undrafted rookie receiver and former Louisiana-Monroe standout Brent Leonard, and signing receiver Tim Toone, who is in his third season as a pro, including previous stints with Buffalo in 2011 and Atlanta in 2012.