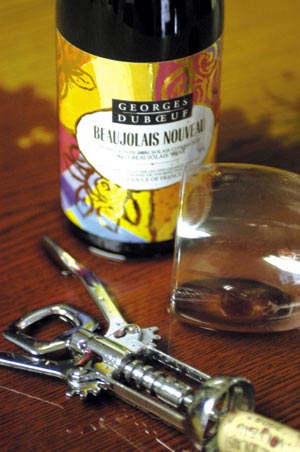 While Cajuns never need an excuse to enjoy a glass of wine, the arrival of the Beaujolais Nouveau each November calls for celebration. The new vintage from the Beaujolais region of France is traditionally drunk for a mere month or so, from Thanksgiving until Christmas. "I had some this week," Marcello's owner Gene Todaro says. "It drank fine."

Beaujolais Nouveau, or New Beaujolais, is the first wine of the season, a taste of things to come. Grapes are harvested and pressed in September and October, then casked for the long haul ' most of the more expensive Beaujolais won't be released until the spring or later. But the first crush, a limited bottling, is raced to Paris, then to every corner of the imbibing world on November 17.

Fruity and fresh, Beaujolais Nouveau is pressed from the Gamay grape, the varietal used in all Beaujolais wines. Most years Lafayette wine sellers offer a multitude of brands, and wine lovers pop multiple corks at tastings. This year however, Hurricane Katrina crashed the party. New Orleans is a port of entry of imported wines and wholesale distributors. With shops and restaurants shuttered and shipping containers still tied up, many wine orders ' including some for the new Beaujolais ' were canceled.

This year, only one label, Georges Duboeuf, has arrived on the shelves of Lafayette shops, and it's in limited quantity. "I had only 10 cases, and they were gone, poof!" says Philippe Simon, owner of Philippe's Wine Cellar. This year's wine is unusually heavy and dark, with far more body than traditional Beaujolais Nouveau. But it's still meant to be enjoyed immediately. Drink it now, because by New Year it will be gone.