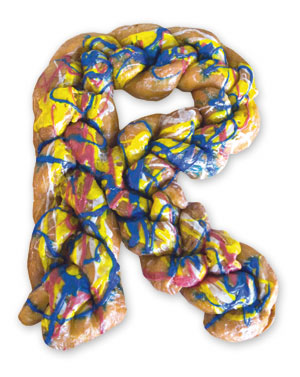 The music, the colors, the costumes ' and now the cake. Lafayette's newest Mardi Gras krewe, Krewe of Carnivale en Rio, is bringing South America's famed celebration to Lafayette. The krewe created its own Rio Cake, mounds of Meche's donut dough shaped like the letter "R," and in lieu of purple, green and gold, the cake is iced in the Rio colors of red, orange, yellow, lime and aqua.

"It's a new twist on an old tradition," says krewe member Janice LeBlanc. "It's kind of a tie-in. When people come to see our parade, they're going to see all the float captains have a sequined costume with a big letter 'R' on the front. I'm kind of predicting that people all along the parade route will be holding big letter 'R's."

The Rio parade will kick off the Mardi Gras season in Lafayette this year on Feb. 18. Twenty-two floats playing Brazilian samba music and sporting different themes will carry the krewe's 505 members. "We have a Carmen Miranda float, so everybody wears the sequined costume with fruit headpieces," says LeBlanc. "There's a coffee float with dark-brown sequined costumes. Ours is the Party Pit float. The Party Pit in Rio is the big party that happens after the parade. The 24 riders will all have beads and confetti cannons."

LeBlanc says the krewe and its mission are a perfect fit for Lafayette's multi-cultural influences. "The Carnivale en Rio de Janeiro is so popular in Brazil and South America, why not bring that here?"