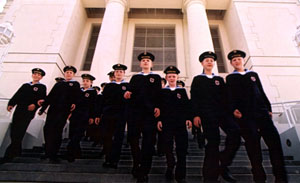 From Mozart and Metallica to Handel and The Talking Heads, the repertoire of the Vienna Boys' Choir spans more than 500 years of diverse musical compositions. The renowned choir applies its collective voices to storied operas, show tunes and even heavy metal ballads and Madonna songs in recent years. What other touring ensemble performs "Ave Maria" and the Bangles' "Eternal Flame"?

The choir has come a long way since its inception in 1498, when six talented boy vocalists were tapped by Vienna Emperor Maximillian I to sing exclusively for his court, at Imperial Chapel Mass and private concerts. Notable musicians such as Wolfgang Amadeus Mozart worked with the choir, and Franz Schubert wrote some of his first compositions while with the ensemble. Their music began in the Brabantine improvisational style of the Netherlands and over the years picked up Dutch, Italian and operatic influences. It wasn't until 1926 that the choir gave its first concerts outside of the Imperial Chapel, and after traveling to Berlin, Prague, Switzerland and Athens, the boys reached the United States in 1932.

Today the group consists of about 100 members between the ages of 10-14 years old, divided into four touring choirs. They still sing at Sunday Mass in Vienna's Imperial Chapel, but their touring repertoire includes contemporary music, traditional waltzes and polkas and Broadway favorites. In 2002, the choir recorded its first-ever pop album, featuring songs by Prince and Earth, Wind, and Fire. They've also contributed music to several movie soundtracks, including Primal Fear and The 13th Floor.

Maybe after its Lafayette visit and performance this Saturday night at the Heymann Center, the choir will incorporate some swamp pop into their set lists.