Whole Foods is the first national grocer to require labeling of all foods containing genetically modified organisms - and there are lots of them. 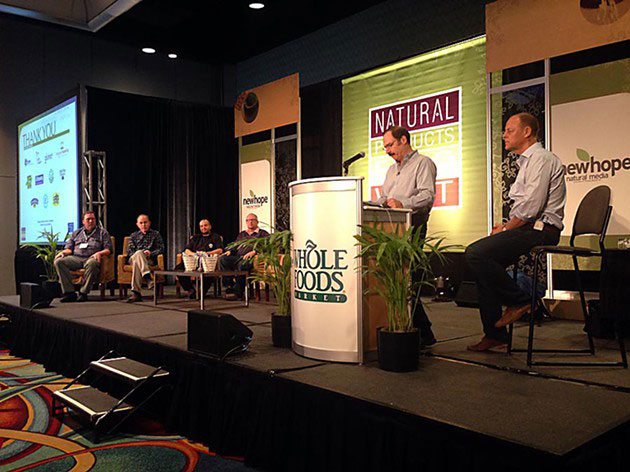 "People need to know how prevalent it is," says Dr. Jake Rodi, an internist at Ochsner Medical Center's West Bank campus in New Orleans. "In the U.S., most of us are eating GMOs. Even if it's not directly, you're probably eating an animal that was fed on GMO corn."

GMOs are organisms that have been genetically modified using some form of DNA technology. In 1983, an antibiotic-resistant tobacco plant became the first successful GMO. Now plants are modified to be pest-, drought- and virus-resistant, herbicide- and heat-tolerant, and to grow closer together, yielding more crops per acre. In addition to increasing the efficiency of food production, biotechnology also has been used for humanitarian purposes, such as the much-touted "golden rice": "Vitamin A was added to rice and distributed free, because a large part of the world is vitamin A deficient," Rodi says.

However, after more than a decade of testing, golden rice is still not available on the market. According to World Health Organization malnutrition expert Francesca Brana, the WHO reported greater success curbing vitamin A deficiency using a technique that's decidedly more old fashioned: teaching people to grow carrots.

Kate Andrus, a licensed dietitian/nutritionist, is wary about using GMOs as a means to curb world hunger and increase crop efficiency, as are other scientists and professionals in the health field.

"Even though some scientists feel that GM foods have a place when it comes to trying to nourish the world's growing population, there haven't been enough unbiased studies conducted to really determine how GM foods affect our health, the health of other animals and insects, the health of the planet - as well as the livelihoods of farmers in developing countries," she says. "Some countries are actually refusing GMO international food aid."

Though GMOs have been deemed safe by the Food and Drug Administration as well as the WHO, their relatively short presence in the food supply means there hasn't been time to evaluate long-term effects.

"There are still a lot of questions," Rodi says. "Though there are lots of studies about their immediate safety, we don't know what their long-term effects are going to be. It could be decades, a whole generation raised on this, before we know the long-term effects. But to be innovative, use technology and make progress, you have to take reasonable risks."

Some of the major concerns are that allergens and antibiotic resistance can be transferred through the process of transferring food genes, Andrus says, and that new toxins, allergens and cancer-producing substances could be an effect of the GMOs, Rodi says.

"It could potentially cause cross-contamination with bacteria and give them resistant characteristics," Rodi says. "We're also worried that mutations in the GMOs could lead them to be less nutritious, with decreased amounts of vitamins, especially as we use crops that grow closer together and need less fertilizer."

Rodi says many of these concerns are based on conjecture. "Just as much as the bad things they say could happen, the potential benefits could be high as well," he says.

Controversy has surrounded GMOs since their inception, and for that reason, it's important for consumers to educate themselves and make their own decisions regarding GMO foods. But it's almost impossible to know whether you're consuming GMOs or not, because genetically modified foods are not required to be labeled. Since the defeat of California's Proposition 37, a bill requiring that food containing GMOs be labeled as such, public demand for GMO transparency has increased.

"Proposition 37 really brought this to a head," says Libba Letton, a spokeswoman for Whole Foods Market, which in March became the first national grocer to require labeling of all foods containing GMOs. "We heard from a lot of customers that it was time for us to do this. They wanted to know whether or not the foods they were buying contained GMOs.

"We aren't taking a stand on GMOs being good or bad. We're letting customers know whether they're in the products or not, and then they can choose. We've long been labeling products as clearly as we can, from country of origin to ingredients, and this is another step in that process."

Whole Foods, which plans to open a store at Ambassador Caffery and Settlers Trace Boulevard next year, expects to have all products in its stores labeled by 2018. "It's a huge process. It's going to be a big job for our suppliers," Letton says. She does not expect the change to affect prices. In the meantime, there are steps consumers can take to minimize their exposure to GMOs.

"The easiest is to buy organic," Letton adds. "By definition, the organic program creates standards that don't use GMO seed in crops intentionally. The second is to go with products that have been verified non-GMO by the Non-GMO Project (www.nongmoproject.org), a third-party, nonprofit group that tests products and ensures they qualify as non-GMO."

She warns that GMO alfalfa, corn, flax, rice, sugar beets, yellow summer squash, canola, cotton, papaya, soy and zucchini are approved for commercial use. Animal products like meat, eggs, milk and fish are likely to contain GMOs, because most GMO corn grown in the U.S. is used for animal feed, ethanol or high fructose corn syrup, which is present in many processed foods.

"The majority of food that has GMOs are things that are processed on some level, like cereal," she says. "Corn, wheat and canola are three of the biggest GMO crops in the country. Bread, buns, ketchup, tortillas - everything you can make from wheat and corn (contains GMOs). ... People are really surprised when they find out how pervasive it is."

Being part of a food culture where consumers are subject to an increasing number of fears (Is my food local? Is it organic? Should I go gluten-free?) raises a question: How worried should we be regarding GMOs?

"Everyone has different food values they eat by," says Andrus, who tries to avoid GMOs. "But I would say choosing non-GMO might be as, if not more, important than choosing organic and choosing local when it comes to our health ... and our community's livelihoods.

"Once again, though, we can't make an educated choice if the food industry is allowed to be completely non-transparent."