The name may be a bit, um, odd, but this South Louisiana pop group is ready to take a big bite out of stardom.

Don't ask where the name comes from. We did - they dodged the question. But Royal Teeth is about to make Louisiana famous for something other than Cajun and zydeco music, gumbo, boudin, gun violence and political malfeasance. 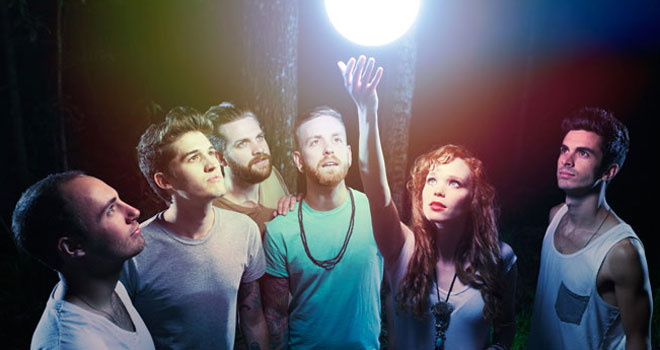 The critics are liking them and college kids are devouring them. Their infectious, happy music built around optimistic lyrics and exuberant, beat-heavy pop compositions will remind you of another Lafayette export that went national a couple of years ago.

And talk about a meteoric rise: the group recorded a five-song EP just over a year ago. It went viral, they quit their day jobs and are already releasing their debut, full-length record, Glow, on Dangerbird Records. And touring worldwide. Groupies and all.

Glow hits the streets Aug. 13. If you're reading this after Aug. 13, it done hit. The band will celebrate the release of Glow with a concert on Friday, Aug. 16, at The District (the old Outlaws on Johnston Street).

IND Monthly caught up with Larson, the band's front man, to get acquainted. He has cool tatts.

[Editor's Note: We made that first part up. It was an email interview. Whatever!]

IND: The name ... gotta ask about it. Where's that come from?
Unfortunately it's a pretty bad story that we try to avoid. Let's just say it's a play on words that doesn't really mean anything.

IND: How has the reception to the new record been?
We have only shared the new record with a small amount of people so far, but the response has been great. It feels really good to have a finished product to share with people. We are counting down the days until the release date.

IND: How would you describe your sound?
Colorful, energetic and upbeat.

IND: If anyone used the term "hybrid" we would agree. There's a definite world music influence. Where's that come from?
That must come from living in Louisiana. We try to carry the spirit and vibe of New Orleans and Lafayette with us wherever we go. There is a ton of positive energy and percussion in most of our songs, which is the best way for us to translate that spirit. We want everyone to feel like dancing in the street, which is something we have all done once or twice.

IND: Another young, South Louisiana band, GIVERS, comes to mind when hearing Royal Teeth. Do y'all know them? Have y'all gigged with them? Is the comparison fair?
We do know them! They are a wonderful group. That is a fair comparison. A few members have known them for a while from school. I didn't know too much about them until we starting playing gigs around town, but I quickly fell in love with them like everyone else in Louisiana.
**
IND: Best gig ever (so far)?**
That is tough. There have been so many great shows. I'm sure every member would say something different. One that sticks out is when we played at Summerfest. We got such a great response from the crowd that we really didn't expect. Nora, Hef and I also got to share the stage with Fitz and the Tantrums for a song. That was pretty special.

IND: Where do y'all want to be in two years, five years, 10 years?
As long as we continue moving forward I will be happy. We all feel very lucky to say this is what we do for a living. We don't take that lightly. If we are able to look back a year from now and we are still making music and playing for people, I will be happy with that. That being said, we want to take this band as far as it can go. We are a pretty determined group.
**
IND: Best/worst parts of touring?**
The worst part for me is feeling exhausted so often. It can really take a toll on your body after a while, and it becomes a real challenge to stay healthy and feeling well when you're traveling and playing so many shows. But the best parts are when we are on the stage. All that matters at that point is capturing that moment with our audience and giving them a great experience. Nothing can beat that feeling. Traveling the world is a pretty wonderful bonus.