How Times-Picayune columnist Chris Rose captured the emotions of a city and state in crisis. 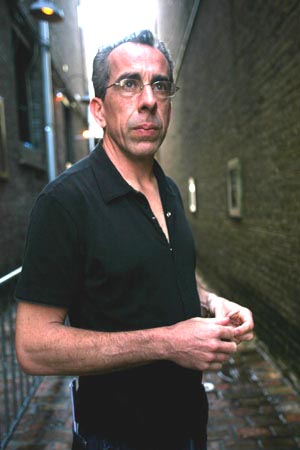 Since Hurricane Katrina, no other writer has tapped into the emotions of storm-weary Louisianans like Rose. His first post-hurricane column, "Who We Are," introduced the rest of the world to displaced south Louisiana residents with a mix of sincerity, humor and gratitude that resonated so deeply it sparked more than 3,000 e-mails to Rose.

And the avalanche of reader response hasn't slowed down. As a result of the 50-plus columns he's written since Aug. 29, Rose has received more than 10,000 e-mails from around the world. "It's uncomfortable for me to talk about, because I entered a realm I did not seek," Rose says via cell phone while taking a break from painting his house in New Orleans. "In the early days [after the hurricane], I just got on my bike and started riding around Uptown through the Garden district, the French Quarter and [Faubourg] Marigny, and I fell into this surrealistic chronicle. And everybody here had a story. I just sort of became the emotional flashpoint for everyone's stories. There's the sensory overload of it and then the emotional fallout of this thing."

For longtime readers of The Times-Picayune, reading Rose's recent work is akin to witnessing a remarkable artistic transformation. In the last decade, Rose had settled into a comfortable groove as the paper's gossip/entertainment columnist. He covered Britney Spears relentlessly, interviewed visiting celebrities in a "Sixty-Second Interview" format, and chronicled the boom of Hollywood films using New Orleans as a prime shooting location. His columns were mostly light, with plenty of one-liners, and whenever a superstar like Jamie Foxx got into trouble while carousing in the Crescent City, Rose provided all the tabloid details.

But Rose was part of a remarkable team of Times-Picayune reporters who provided some of the most important and compelling journalism in the wake of the hurricane. As Editor Jim Amoss temporarily moved the paper's base of operations to Houma and Baton Rouge in the immediate wake of the storm, Rose huddled in New Orleans with an unlikely group of colleagues that included New Orleans Saints beat writer Jeff Duncan, art critic Doug MacCash, music writer Keith Spera and restaurant critic Brett Anderson to provide a ground-level view of the chaos in the city. That exhausted crew of sports and arts-and-entertainment writers helped catalog some of the horrors at sites like the Convention Center and Lakeview.

When the immediate danger subsided, Rose was left to ponder the emotional blackness that filled so much of New Orleans. And he did it alone, as his wife and three children had evacuated to Maryland. In one stretch, he wrote a number of columns that painfully captured the psyche of the city with searing details. "The Storm that Keeps on Killing" detailed the suicide of a new neighbor he'd just met a few weeks before the man killed himself; "1 Dead in Attic" was a harrowing travelogue of sorts that found Rose driving through the Ninth Ward, unable to escape the questions and images that plagued his mind when he saw FEMA markings such as "1 Dead in Attic" on houses.

"As time went on, I became a little unglued there," remembers Rose. "That dark stretch there, I started getting e-mails from strangers asking, 'Are you OK?' I just hit an emotional note over and over and over. People were reading about levees and looting and reconstruction and FEMA, and in the end a lot of them seemed to be getting a visceral feel for what's going on in my columns. The whole process gave me a deep and profound understanding and respect for mental illnesses. I spent a lot of November and December with shaking hands and curled into a fetal position. I couldn't will myself out of it. When my kids came back [to New Orleans], I got cured. I needed to have something to hang onto.

"What kept me going is the response from the stories," he continues. "The stories were getting out there, not only here in town, and I felt like I was part of the lifeline for folks out of town. Those e-mails make me feel like I'm doing something important."

As numerous Louisiana political and editorial writers experienced a renewed sense of civic engagement and took on politicians and politics-as-usual with fury and emotion, Rose also headed into new personal and professional territory. In another one of his memorable columns, "Lurch Lessons," he described an unexpected confrontation in a drugstore parking lot:

"I was at my local Circle K the other day, sitting in my car in a borderline catatonic state when I witnessed a guy in a truck in the parking lot wadding up a ball of trash and throwing it out his window," he wrote. "I have silently witnessed this sight a million times over the past 20 years. On Broad Street, on Magazine Street, in the French Quarter, everywhere. It's almost like litter is a part of our heritage.

"Well, I snapped. I got out of my car and approached the offending vehicle and I tapped on the guy's window. During my walk to said vehicle, a very loud voice inside my head said to me: Don't do this. You are not well. It's none of your business. But there are lots of voices in my head these days â?¦

"We looked at each other. And then I said ' or maybe I screamed: 'You can't do this anymore!' â?¦ The guy was frozen in his seat. He was no doubt wishing he had gone to Winn-Dixie or the Stop-and-Go or anyplace else but this Circle K. But here we were. I laid it out on this poor sap. I said, 'We've got to change. We can't go back to the way we were and the way we were was people just throwing crap in the streets like it doesn't matter. We need to do better. We need to change.' â?¦

While Rose half-jokes that he "got a little preachy there for a while" in some of his columns, he knows that old journalism models won't cut it in post-Katrina New Orleans. "This whole thing has tossed out the notion of objective journalism," he says. "We're fighting for the survival of our jobs and our city."

As New Orleans and Louisiana tries to keep that message alive in Washington, D.C., Rose will help beat the drum with the release of his new book, 1 Dead in Attic, a collection of his finest post-Katrina columns. The first printing of the book is 7,500 copies and will be available at Rose's Web site (www.chrisrosebooks.com) and his book signings. "There have already have been [Katrina] books, but I think what I've got here is something others don't, which is immediacy," he says. "It wasn't ruminated over. I went out, did it, and wrote it. It has an emotional edge that no one else is going to capture and I thought it was a worthy literary component to this whole ordeal. Historically, it tells a small story, but it's emotional, and I think people want to have and remember that."