An auction to benefit the arts and a memorial show are part of Lafayette painter Guy Ransonet's legacy. 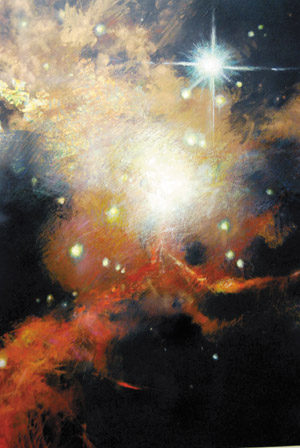 Shortly after artist Guy Ransonet was diagnosed with a brain tumor last November, his friend and former teacher Elemore Morgan Jr. visited with him, and Ransonet showed him a body of work that had never been exhibited. Impressed, Morgan suggested that Ransonet donate a painting to the Community Foundation of Acadiana's Visual Arts Endowment Fund. Ransonet took his friend's suggestion to heart and before his death in March made the gift of a moonlit landscape, Out of Darkness (pictured, inset), to the non-profit. The image will be used by the CFA in its marketing campaign this year. Simultaneously, at Morgan's urging, ACA curator Rose Courville put together a memorial show of paintings, drawings and custom furniture that Ransonet designed for his clients during his 40-year career.

Ransonet first studied art under Morgan and UL Lafayette professor Alan Jones before switching his major to interior design. He graduated in 1970 and began working in residential design, but painting was never on the back burner. Ransonet created original works for his clients that became part of his whole design concept.

The majority of his works are Louisiana landscapes. Ransonet admired 19th century Louisiana painter Alexander John Drysdale, a master of atmosphere, who captured the liquid essence of south Louisiana in his hazy swamp scapes. Ransonet's use of muted color ' landscapes seen through a veil of humid light ' speaks the same language. Working in acrylic and oil pastel on canvas or paper, the mixed media works are romantic renderings of the Cajun prairie. In 1998, after the publication of some photographs taken by the Hubble telescope, Ransonet's imagination leapt into the heavens ' his triptych titled Out There (pictured) is a fiery dream of the birth of a star.

For this final show, family and friends are lending works from their private collections. Out of Darkness will be auctioned on May 31 at a preview party at the ACA, proceeds going to the CFA arts endowment fund.

Guy Ransonet: Paintings-Drawings-Designs, 1964-2007, A Memorial Exhibition opens June 1 and will run through June 23 at the Acadiana Center for the Arts. For more information call 233-7060 or visit www.AcadianaCenterfortheArts.org.