The baby can't eat a standing ovation, and extended solos don't always pay the mortgage. Sometimes it takes a 9 to 5 gig. 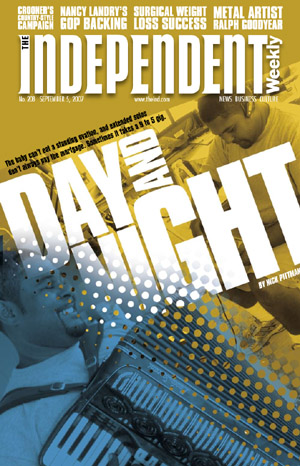 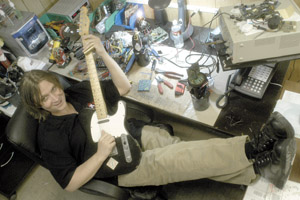 Acadiana musicians have long embraced the belief that hard work inspires good, honest music. D.L. Menard wrote "The Back Door," a strong candidate for the most famous Cajun song ever, while pumping gas at a service station. Dewey Balfa, even after touring the globe as an ambassador of Cajun culture and music, drove a school bus in Evangeline Parish. John Delafose led the popular Lawtell Playboys band at night and tended his farm near Eunice during the day.

Those seeds were planted by the Cajun and Creole laborers at the turn of the century who sang songs in the field to make the day go by faster. At night, musical expression was an escape from the day's tribulations and the tasks that lay ahead. Just as much as good times, courtship and love, lyrics of pushing a plow, swinging hammers and punching the clock populate many a south Louisiana song.

This tradition is carried on by today's Acadiana musicians, who use the financial security, inspiration and experiences of their day jobs to inform their music. Here are six locals whose diverse professions help bring us the music that fills our dancehalls, nightclubs and radio stations.

On Dexter Ardoin's next album, the heir to the Ardoin legacy (built by Creole pioneers Amédé and Bois Sec Ardoin) hopes to play an accordion he is currently building. "I'm gonna appreciate the price," says Ardoin of his project. "I won't gripe ' it's a lot of work, a lot of fine detail work, and everything has to be just perfect."

A carpenter by trade, Ardoin continues his family's legacy of craftsmanship going hand-in-hand with music. He describes his job with A&A Construction using the term "slash" ' he's a carpenter/all-around handyman. For two years, he worked as a mechanic before getting into carpentry, building steps and decks and installing insulation and plumbing. However, unlike his family, Ardoin's career is not the source of his musical inspiration or an escape from his day gig. Instead, it's a more noble pursuit: staying in Acadiana is a way for him to stay at home with his wife and kids. Ardoin's steady income allows him to keep Acadiana as his home base, as he only gigs two weekends a month. For him, the balance is perfect.

"I love to play â?¦ but to me it is stress," he says. "'Cause you always gotta worry about 'Where can I play? What I gotta do? What needs to be done?' It is always a worry playing music. When you have a full-time job you just show up at work, do your work and that's it."

With a musician's tools being his hands ' especially the complicated workings of an accordion ' no one would think less of him if he took extra precautions and maybe switched professions to more digit-friendly occupation. Ardoin is careful as a carpenter, playing it safe not to lose a finger to a saw blade or smash himself with a hammer.

"I'm always cautious about what I am doing," says Ardoin. "You learn quick after a few hits on the finger. That will make you cry."

GROUNDED BY THE GULF

In his song "Water & Steel," Michael Juan Nunez immortalizes his days working offshore: "Two weeks on and I'm about to snap/I left my baby back home in Erath/covered in mud from head to heel/pumping that oil through water and steel."

The song, done in Nunez's Delta blues-meets-Acadiana prairie style, captures the experiences of the oilfield. Nunez pines for home as he is stuck 10 miles out in the Gulf of Mexico, working 12 hours a day under immense pressure from a loud boss to keep the gas pressure flowing.

Recorded years after Nunez left the offshore game, it's clear the experience stuck with him. These days the closest to offshore Nunez gets is doing electronic repairs on devices brought in from rigs. Nunez works for the navigational department of Fire and Safety Specialists ' a fire and gas detection sales and service company. "I stay at the bench now. It's not exactly gonna make me a millionaire, but it is good money, and best of all I have flexibility with my schedule," says Nunez, noting he has time for both his family and his music. "I get to watch my girls grow up, and that, to me, is priceless."

Nunez did his time in cover bands and started developing his own style in The RiverBabys, a synthesis of blues, southern rock, south Louisiana influences and funky rhythms. After the band went into semi-retirement, he gigged with Zachary Richard and Roddie Romero & The Hub City All-Stars.

Nunez passed on chances to take his music on the road, which would have meant more lucrative gigs. Instead, he opted to stay at his job and not become a full-time musician. As he puts it, he isn't tied up in the music scene, which gives him a life perspective that comes through in his music; songs such as "Mama's Kitchen" relate a 9-to-5 plate lunch existence.

"Most of the people I deal with on a day-to-day basis aren't big music fans," says Nunez. "Most have no idea what I do outside of work, or the people I've met, places I've been, experiences I've had. That really keeps me grounded."

A COUPLE WITH CLASS

Husband and wife Jason and Andrea Leonard have a lot in common. Not only are they both musicians ' performing as the duo Trouble with Lefty ' they're both educators.

Vocalist Andrea is a chemistry teacher at UL Lafayette. Jason, who also performs with the Ron Jeremy Trio and does tablature for Seven Mary Three, plays guitar and recently joined UL's education department as a program coordinator after teaching at Northside and other local schools.

In educational theory, Howard Gardner defined different intellectual areas where students excel. Some students express higher intelligence in music, able to compose songs and recognize tones. And while the Leonards are the perfect teachers for those students, they keep their own musical talent outside the classroom.

When speaking of his previous teaching post, Jason notes, "With all the state curriculum things, this and that, I had no time to experiment with bringing other things in. Plus, there is a cheese factor that looms over the idea of making things hip to the current style, etc. Next thing you know, Coolio and Michelle Pfeiffer are here to save the day."

At UL, Andrea keeps it low key as well. "Everyone would make fun of teachers who sang in class when I was in school," she says. "I prefer to keep it like a secret identity."

Unlike her husband, Andrea prefers a good night's sleep and taking gigs on the weekend and says attempting both her day and night gigs during the week is "homicidal." Jason, on the other hand, never minds pulling a late night and then facing duty in the morning. Last spring, he played a Sunday night in Hammond (nearly a two-hour drive) and had class the next morning. During the week, he opts to play gigs that end earlier. Still, he can't resist traveling to Baton Rouge for a show that ends at 10 p.m. The same week of the Hammond gig, he played five times, gigging four nights in a row.

"As much as I complain about this and that, I cannot give it up," says Jason. "What else am I to do? Cross stitch? Plus, it's the only way I can justify buying new equipment to my wife."

During the week, Mark Warner juggles multiple roles to provide therapy for local patients. The clinical psychologist and neuropsychologist keeps busy at his own small local practice and consulting at the Acadiana Brain Injury Center. Plus, Warner sees pain patients once a week at Dr. Steve Staires' office and is on the medical faculty at UMC, where he trains medicine and family practice residents and runs research for the hospital.

For his own therapy, when the many hats get too heavy, he turns to his trio the Road Doctor Revue. Guitarist Warner, who holds a master's from UL and a doctorate from LSU, has an impressive 28-year career between practice in Lafayette and Baton Rouge. Likewise, his music career stretches back to his youth.

"In college, when I had a bad semester I went off to the road and played music locally in New Orleans, then the ski resort and club circuits," says Warner. "I realized one day looking out of a bus window that music would not be the career, so I went back to school."

During his tenure as a medical professional, his time off saw spots playing with Lil' Buck Sinegal, the late Harry Hypolite and Walter Jr. at now-defunct venues such as the Hospitality House and the Red Dog Saloon. "Those times were reminiscent of my best experiences with the Chicago players I had played with years ago."

Three years ago, he formed the Road Doctor Revue ' which holds down 50 gigs a year at bars and restaurants like the Blue Dog Café and Clementine Dining & Spirits. Currently, the trio features bassist Wayne "Blue" Burns (Clifton Chenier's bassist for 18 years), with drummers Roland Fontenot and Tim Courville sharing duties. "The music for me has been my therapy and a chance to learn from some of the folks who have defined the blues in Lafayette and this area," says Warner. "So what we have here is a grateful doctor who does the day gig in spades and gets a chance to learn from the masters in the night time. Can't ask for better than that."

He spends his days helping Ideal Steel, a company that makes and supplies metal buildings. Previously, he worked with the troubled Southern Structures. After Southern Structures lost its way financially, Slim jumped to Ideal, an offshoot company. Starting with the customer's needs, Slim performs multiple duties at Ideal.

Working with architects, contractors and clients, he aids in planning the design and matching concepts to their budget. Then, he steps into the engineering department to help produce plans. When the building is manufactured, he sets up deliveries of materials and continues customer support. As it goes up on site, Slim follows up technical questions and troubleshoots problems.

Making sure massive metal buildings fit together perfectly is a far cry from a Transmission gig. The band gives audiences everything they have, ripping through their sets. When Frigg A-Go-Go made its return in 2006, it had the unfortunate task of following an incredible Transmission set. This October, theTransmission and brass bed become the first two Lafayette rock bands to appear at New Orleans' renowned Voodoo Music Experience.

"Honestly, it's not easy," says bassist and singer Slim. "At 3 a.m., I'm exhausted, drenched in sweat and in the full rock 'n' roll afterglow. I'll get home, shower and get a couple of hours of sleep before I have to make the commute to my office in Broussard. Lots and lots of coffee get me through those mornings."

With long hair, tattoos and a frame that more than lives up to his nickname, Slim ' who looks like he was born to be a rock star and nothing else ' stands out in the office or on a construction site.

"Since I've started in this business, I've been the office eccentric," he says. "I dig that."