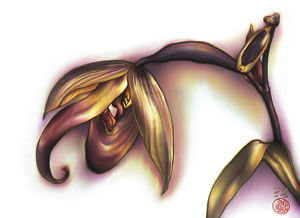 Silk and orchids appear the most fragile of substances. But silk's toughness is matched in the botanical kingdom by the hearty orchid. Lafayette silk painter Rosanna Pousardien Czarnecki combines the two in her silk crepe painting "Unfolding," which has been accepted in Orchid Express, a juried exhibit of silk paintings of orchids at the Smithsonian Institute National Museum of Natural History in Washington, D.C., through May 1.

Czarnecki's orchid is a yellow Lady's Slipper, indigenous to North America. A visit to an orchid grower in California inspired her to do a series of silk paintings of the rare flowers ' one of which won first place at the Capitol Orchid Society Show hosted by the local Washington, D.C., Orchid Society.

While acrylics and oils can be used for silk painting, the rich color and flow of dyes make it the most compelling medium, Czarnecki says. "The dyes are so luscious, they're addictive." After the dye is steam set, it permanently bonds with the silk. Thus what looks like the most delicate of fabrics, painted with jewel-like colors, can be worn as a scarf or jacket and washed or dry-cleaned.

The Orchid Express exhibit explores the occasionally perilous history of the earth's most sought-after flower. Some varieties of the plant were nearly pushed into extinction by the hunt of 19th century collectors seeking the orchid. (Despite its exotic appearance, the orchid is fairly easy to grow.)

Czarnecki likes the play between the illusion of fragility and reality of strength both in her subject matter and her medium. Painting is where strength and beauty intersect, a place of deep meaning for her, she says. That's what her signature in Chinese characters on the bottom of her work implies; translated, it reads "eagle's wings."