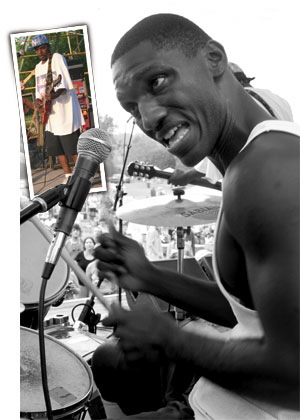 In the hills of north Mississippi, far from Chicago's blues scene and Memphis' Beale Street, there's a hypnotic style of blues that's taken root and flourished. Guitarist Junior Kimbrough cultivated the sound, along with fellow guitarist R.L. Burnside, two regulars at Kimbrough's juke joint, Junior's Place, a hole in the wall just outside of Holly Springs featured in the documentary Deep Blues. Kimbrough died in 1998, and his club burned to the ground two years later. In September 2005, Burnside passed away.

But the torch for the hill country blues burns brightly with Burnside Exploration.

In a phone interview from his home outside Holly Springs, Cedric says, "Coming up in Junior Kimbrough's club, we were so young. We weren't even old enough to be in the club, but we were part of the band. They had to have us. Sometimes the cop's would come in there, and they would have to hide us behind the coolers to keep the band going. It was crazy."

Today, the two men aren't hiding in the clubs and instead are onstage front and center. The backbone of their music is undeniably derived from the hill country blues, anchored with a trance-inducing drum beat and layered with a guitar that is at times reminiscent of Stevie Ray Vaughan and Albert King, with Cedric's vocals rounding out the sound. The duo released its first CD last year ' recorded in only three and a half hours ' simply titled The Record. A second release is scheduled for release by year's end.

"We've just been around each other a long time, and we connect," Cedric says. "I know where he's going without even looking at him. He ain't even got to look at me, and he knows where I'm going and every little lick I'm fixing to hit."

The Burnside Exploration will be hitting several licks on Thursday night in Lafayette, and Cedric promises a powerful performance. "If you're wearing any hats," he says, "I suggest you tie 'em down because we're going to blow 'em off."