Creole musicians showcase one of Acadiana's earliest musical traditions in a special performance. 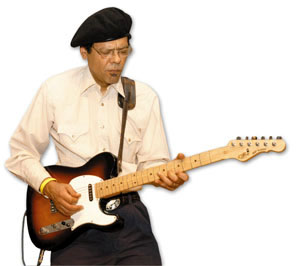 When D'Jalma Garnier began researching juré a decade ago, he found people would talk about the musical style, but no one who would sing the a cappella songs. "Everybody would just clam up," he says. "When you pull out a tape recorder, people get really shy. I was looking for jurés, but they wouldn't give them up. They were singing them in the kitchen, but nobody wanted to come out and sing them, except for Jeffery Broussard. He got his family to come out."

Juré was the predecessor to la-la music, the basis of zydeco. Long before accordions and fiddles entered the Creole homes of southwest Louisiana, the call and response songs were sung in homes and accompanied by the stomping of feet and clapping of hands, making for an up-tempo, highly rhythmic music. "They would sing them during Lent when you weren't supposed to play instruments," Garnier says. "It's not that big of a thing anymore, but back then in Louisiana, all they really had was singing."

He saw and heard his first public performance of juré last April at Chicot State Park in Ville Platte. It was part of the Louisiana Folk Roots' Dewey Balfa Cajun and Creole Heritage Week, and Zydeco Force's Broussard, accompanied by members of his family, led the performance.

Garnier (pictured) adds that even the term "zydeco," derived from the phrase "zydeco est pas salé" and popularized by Clifton Chenier's 1965 recording of the same name, originally appeared in a juré song. While there are some juré field recordings, few professional juré recordings exist, aside from a handful of numbers found on Lynn August's 1992 record Creole Cruiser and the 1993 Sauce Piquante.

And public performances of juré are even more rare.

That will change this Saturday night at the Sliman Theater in New Iberia, when Broussard ' along with Virginia Bellard, Ceclie Broussard and Virgie Mayon ' take the stage to perform juré. And as an added bonus, for the second set, Garnier and Broussard will perform Creole music with Preston Frank and Ed Poullard.

Louisiana Folk Roots presents "La Musique Creole" as part of the Saturday Night on the Teche concert series, Saturday, July 30, at 7 p.m. at the Sliman Theater in New Iberia. Admission is $10, and tickets are available at the Acadiana Arts Council, New Iberia City Hall and at the door. For tickets, call 233-7060 or 369-2300, and for more information, call 369-2330.