Kevin Naquin & The Ossun Playboys give back to Festivals Acadiens with a fundraiser performance. 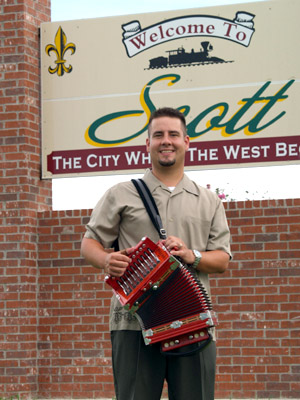 "It's not about if you can play 'Mustang Sally,' it's about playing from your heart," says accordionist Kevin Naquin. "This is what [Festivals Acadiens] is, it's for our ancestors."

When he was young and cutting his teeth on the squeezebox, Naquin would spend entire days at the festival soaking up the music of Steve Riley, Walter Mouton and others. Through the strong traditional Cajun line-up the event offers, Naquin built the base to his Ossun Playboys, a sound that still comes through loud and clear even as he pushes the envelope for Cajun music. This Friday, Sept. 29, Naquin gives back to Festivals Acadiens with a Lafayette Jaycees benefit show at Vermilionville. The venue isn't a new one for Naquin ' in the 1990s, he made his debut there at 16 years old.

Naquin's current schedule takes him across south Louisiana and to some road shows and festivals where the audience doesn't understand or fully appreciate Cajun French music. Those audiences expect rock music or want the band to play familiar songs. At Festivals Acadiens, Naquin's Ossun Playboys can relax, taking comfort in knowing they are there to play their music, not bend to the whims of a crowd looking for rock 'n' roll. (The 2006 Festivals Acadiens dates are Oct. 13-15.) Many of the shows may pay better than the Girard Park festival, but Naquin doesn't mind. When he hears other musicians saying they won't play because of the money, he thinks about the pride Festivals Acadiens brings him. "You can give me that festival for the rest of my life," he says.