Bob Thibodeaux aims to reforest the coast, with a little help from his friends. 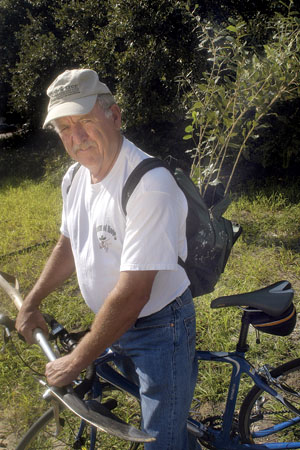 Bob Thibodeaux had private plans for his birthday. A cancer survivor inspired by Lance Armstrong, he took up endurance cycling and was planning a solo long distance ride to celebrate. While bicycling in the countryside keeps Thibodeaux close to nature, he had bigger things in mind for this trip.

"I was going to get a bunch of live oak seedlings in a back pack, pack a small shovel and ride down to the Rita coastline and plant trees for about five days," says Thibodeaux, an arborist. "I was going to do this alone for my 66th birthday."

The oak ridges of coastal western Louisiana were devastated by the hurricanes of 2005. "When Rita came through, I thought we'd have some problems," Thibodeaux says. "After the storms, I realized how much tree loss has occurred. Here comes FEMA and all those different projects but nothing to replant trees. I decided my company would donate 10,000 live oaks — plant 2,000 a year for five years. We'll have a lot to donate for Arbor Day, Earth Day as well. Ten thousand oaks won't do a lot to restore the coastline, but it will help. After Rita, we probably need a million trees planted."

Thibodeaux's urge to plant trees has deep roots. His father-in-law worked for the Civilian Conservation Corps in Louisiana during the Depression, planting the oak alleys that still line some of the two-lane highways in the state. Thibodeaux has been an arborist for more than 40 years. His company, Bob's Tree Preservation in Church Point has become the most progressive tree business around, says UL Lafayette horticulture professor and arborist Jim Foret. "He went from a guy cutting trees to someone who was working to save trees," says Foret. "He was the first one I know to begin using mulch to help protect the root structure." Thibodeaux has planted an 80-acre arboretum and tree research facility on his property in Church Point and spends as much of his time on environmental activities as he does on his business.

Thibodeaux's solo cycling trip was nixed after a few of his buddies discovered his plan. As members of an international group of arborists who raise money annually for tree research by being sponsored for long distance bike rides, Thibodeaux's colleagues didn't have a quixotic view of his idea. In the spirit of their annual Tour Des Trees fund-raiser through idyllic landscapes like California's wine country, his peers elected to sign on with Thibodeaux for a cycling expedition to reforest parts of Calcasieu, coastal Cameron, Vermilion, Iberia, St. Mary and Terrebonne parishes.

No longer a lone Johnny Appleseed-esque rambler, Thibodeaux needed some organizational help with the project, which he dubbed "Acorns of Hope." The first offer came from Paul Wood, the bike touring coordinator for Tour Des Trees and owner of Black Bear Adventures Bicycle Tours in South Carolina. "The Tour Des Trees is about 70-100 cyclists," Wood says.

Calls came in from members as far away as Oregon, Maryland and Canada to participate. "This year, we're expecting a small band, maybe 15-20 arborists to initiate the effort," says Wood. "But it's a five-year commitment, and next year there will be more of us." He will drive his "sag van" for riders who need a rest along the way. Glen Wilson, an LSU arborist who works at the Burden Research Center and a longtime friend of Thibodeaux's, is providing daily picnics, tables, chairs and amenities to the riders over the course of their trip.

Locals from city governments, tourism bureaus, 4-H clubs, schools and America's Wetland, the state's marketing initiative to bring attention to Louisiana's coastal erosion problems, are all doing their parts. Lori Marinovich, director of downtown development for Lake Charles, is coordinating the kick-off at the new Ward 3 recreation complex in Calcasieu Parish. The five-day ride begins there with a presentation on proper tree planting before shovels hit the dirt. Lake Charles' Jolly Roger Cycling Club will accompany the arborists on their first leg, down to Creole, in Cameron Parish. There, 4-H groups brought into the project by America's Wetland Conservation Corps Director Sharon Neighbors will help plant trees where new schools will be built, on sites where Rita wiped every school in coastal Cameron off the map.

The seedlings themselves have their own provenance. Grower Mike Richard, who owns Live Oak Gardens Ltd. on Jefferson Island, has been collecting acorns and selecting young seedlings for vigorous growth habits. Years ago, Richard found an oak tree he admired for its healthy canopy and harvested buckets full of acorns. Of the hundreds of seedlings he propagated, one grew particularly quickly into a handsome oak. He transplanted the oak to his property on Jefferson Island, once dubbed Orange Island for its orchards. Every year he plants the acorns of this particular tree and sells the seedlings as "Orange Island" oaks.

"It's a unique oak that's tough, so it can be transplanted into a hostile environment," says Thibodeaux. These are the acorns Thibodeaux is using on his mission to reforest the coast. He will likely encounter what is left of a stand of 100-year-old oaks on Grand Chenier he once saved from the ax. In 1998 he refused a state contract to cut the alley of oaks lining the coast road near Rockefeller Wildlife Refuge. With the aid of former Gov. Mike Foster, he backed down the state department of transportation and preserved the historic grove. Hurricane Rita accomplished what the state highway department couldn't, uprooting many of the centuries-old trees. That is one of the many areas Thibodeaux will roll up to with his bucket of acorns and band of bicycling cohorts.

For more information on Acorns of Hope, call Bob Thibodeaux at (337) 684-8733 or e-mail: [email protected] or visit bobstree.com/acorns.asp