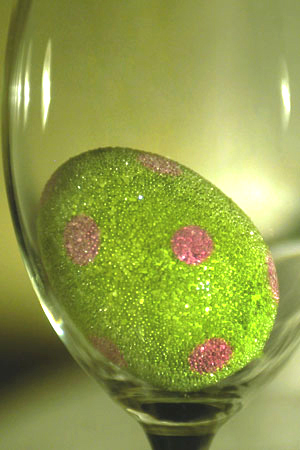 Every year on Easter Sunday after church, my mother's side of the family gathered on the front porch of our Cypremort Point camp for the big knockoff. Eggs had been boiled and dyed the night before, mom had made the scoring brackets on a sheet of white posterboard, and those old enough to participate were ready to "pâque." Two by two, cousins, aunts and uncles knocked eggs end to end, until one person's cracked. After all the brackets had been filled in, one egg emerged as the strongest, and a victor was crowned.

All over Acadiana and as far as Marksville, families have been pâcquing eggs for generations. The term pâquing comes from the French word for Easter, Pâques, and also from the "pock" sound the eggs make when they knock against each other. Pâquing has its origins in Europe. "The Greeks have a tradition of battling eggs," says Amanda LaFleur, coordinator of Cajun Studies in LSU's French department. In LaFleur's hometown of Ville Platte, pâquing eggs on Easter is "a very big deal." The LaFleur family champion pâques against the champion of the Aucoin family, complete with rehearsed dancing, cheers and songs. The Aucoins arrive in flatbed trucks with a live band, while the LaFleurs take a schoolbus and chant "We will, we will pâques you" all the way.

Different families and towns have their own methods for producing a winning egg. In Marksville, where the big pâquing event has been held on the courthouse square since 1956, participants boil their eggs point down to ensure there are no air pockets. Older generations claim boiling the eggs in coffee grounds makes them stronger. In other cities, it's not always "pointy end to pointy end" pâquing, says LaFleur. "A student from Jeanerette told me that they hit the eggs on their sides. A student from Opelousas tells me that in her family it's big end to big end," she says. In LaFleur's family, "sidepâquers" are considered cheaters ' and the treatment of the champion egg rivals that of the Easter Bunny. "Until the crucial moment, our top egg is wrapped in a tiny mink stole, a trim from my mother's old stole, and carefully guarded," she says.