On the heels of its second major renovation in five years, Lafayette General Medical Center is now constructing a new emergency department and expanding its surgery department, along with renovating its existing ED and adding a six-level parking garage.

The more than $50 million price tag will add another 86,000 square feet to the existing million-plus-square-foot campus. 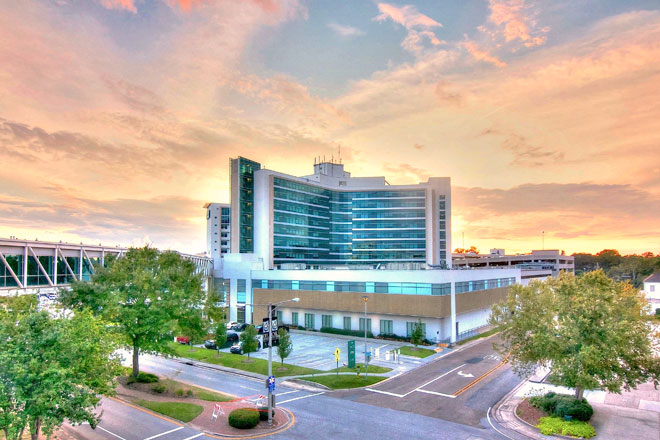 "After the recent renovation of the whole hospital, the LGMC administration made a commitment to the surgeons in our community that we would upgrade the surgical facilities," explains Marie O. Lukaszeski of Interior Design Solutions, interior designer and project manager for the LGMC expansion. "So the genesis for this expansion was creting a new technology-driven surgical platform. And in doing so, it made a lot of sense to relocate the sterile processing department along with it. It also made sense at that time to look at the existing emergency department that we are housed in, and realize that we need a bigger footprint to accommodate the patient census that we've seen increase over the past several years."

Breaking ground in October 2012 was Phase 1, consisting of a 131,087-square-foot addition, including an expansion to the emergency department, a new surgery suite, trauma elevator tower and sterile processing department in the existing front parking lot facing Coolidge Boulevard. On the first floor is the 18,000-square-foot emergency department expansion, which will include a new main ED treatment unit with 22 exam rooms, two upsized critical/bariatric rooms, two trauma rooms and three dedicated psychiatric holding rooms. In the center of this unit is a central nurse station designed in two wings. A new ambulance entrance and triage area will accommodate ambulance patients more efficiently. This phase is expected to be completed by April 2014.

The cool part of the ED expansion is a new trauma elevator with direct access to the helipad. This elevator will be large enough to accommodate an entire emergency team, allowing seamless care from the time patients arrive by helicopter until they reach the emergency department. "It's a dedicated elevator that is much larger - about the size of an exam room," Lukaszeski says. "So the team of professionals that come to meet a trauma patient on the roof can all fit inside the elevator, bring that patient directly down into the emergency department and not in public view, and get that patient to a treatment area in the absolute fastest way possible."

As soon as the ED expansion opens, Phase 1A, consisting of renovations on the existing emergency department, will begin.
Above the new ED floor out front is a 46,000-square-foot surgery department comprised of three main sections. First is the surgery platform, consisting of 11 operating rooms ranging from 700 to 900 square feet and accommodating any surgical procedure. Next is a pre-operative holding and post-anesthesia care unit with the ability to hold 22 patients. Third are staff areas with a surgery control desk, surgery office, staff lockers and restrooms.

But the growth doesn't end there. The current four-story project is designed for future expansion above the central processing department of up to six additional stories, allowing another 144 patient rooms.

In August, construction is anticipated to begin on Phase 2, the new parking garage. This six-story, pre-cast structure will accommodate about 343 vehicles.

Completion of the ED and surgery expansion, existing ED renovation and parking garage is projected for fall 2014. "I think that once we have this done, we will have the second highest volume ED in the state," Lukasezki says.