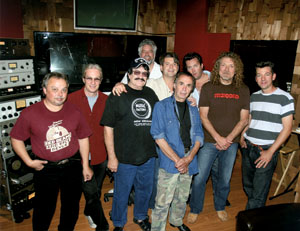 Acadiana music circles were buzzing in late April because the Golden God was in town. He ate crawfish at McGee's Landing in Henderson, had dinner at Charley G's, popped into Dwyer's one morning, visited La Louisianne recording studio and checked out Travis Matte at Wrangler's in Carencro.

There was one reason for legendary Led Zeppelin frontman Robert Plant's extended Acadiana tour: Fats Domino. Plant and the Lafayette swamp pop supergroup Lil' Band O' Gold had just wrapped up recording a version of Domino's "It Keeps Raining" for Goin' Home: A Tribute to Fats Domino, a two-CD homage that hits stores this week. Goin' Home features Domino tracks played by heavyweights such as Paul McCartney, Tom Petty, Elton John, Neil Young and the cream of the crop of New Orleans music royalty ' but "It Keeps Raining" has been chosen as the first single released from the album.

"It was certainly a career highlight for me," says LBOG's C.C. Adcock, who co-produced "It Keeps Raining" with Plant. "Culturally and musically, it was nice to have it come full circle. There have been lots of people who have always tried to define what swamp pop is, and [LBOG singer/drummer] Warren Storm always says, 'It's Fats Domino music.'"

The Plant/LBOG partnership clicked in just one day of fruitful recording, with the 70-year-old Storm providing a first-generation link to Domino's unprecedented impact on contemporary American music. "Warren had literally been practicing his whole life for that afternoon, and it was a really perfect fit," says Adcock. "And then to realize besides our own little pocket, Fats helped create things like Led Zeppelin. To realize what a profound effect that man and his music had, maybe even unknowingly, on the future of modern music ' Robert Plant and Jimmy Page were completely influenced by early rock and roll like Fats Domino, and then you think about all the modern bands influenced by Led Zeppelin, and the whole rock 'n' roll thing starts with Fats."

Lil' Band O' Gold's Warren Storm and David Egan join Irma Thomas, Ivan Neville, Jon Cleary, Walter "Wolfman" Washington and more to play a CD-release party for Goin' Home: A Tribute to Fats Domino on Saturday, Sept. 29 at Tipitina's in New Orleans. Tickets are $25 for general admission or $150 for a VIP package that includes a reception with Domino, open bar, a copy of the CD and a commemorative poster. For tickets or more info, call (504) 895-8477 or visit www.tipitinas.com.