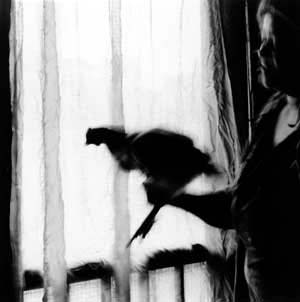 In 1983, during her trips to take photos along the Mississippi River, New Iberia native Debbie Fleming Caffery noticed a lone house alongside the road of her well-traveled route. It was a year later that she saw the house's inhabitant walking outside. Caffery pulled over to the house, introduced herself to Polly Joseph and took a photo of her. The two women became friends, and Caffery documented the relationship in a series of portraits she recently published in Polly.

Caffery writes of the friendship: "Going to Polly's was like being vacuumed into a feeling of security and warmth. I would rather have gone to her house than any place during those years â?¦ Our friendship was characterized by warmth and affection and shrouded in the dimness of her home."

Now based in Santa Fe, Caffery returns to the area regularly to continue her work. Recently, she was awarded a Guggenheim Fellowship, a prestigious grant awarded by the John Simon Guggenheim Memorial Foundation, which allows artists to focus on their craft for six to 12 months. (According to the foundation's Web site, the average fellowship in 2003 was for $35,747.)

Since 1973, Caffery has garnered acclaim for her black and white images that portray the burning fields, the smoke-filled skies and the implements of the sugar cane industry that surround New Iberia. More than documenting a single moment in time, Caffery's renowned images elicit an understanding that is more often primordial than it is cerebral. And it's a feeling that's evoked again within the pages of Polly ' a testament to one woman's spirit, another woman's vision and the friendship that binds the two together.

Polly is published by Twin Palms Press. For more information, visit www.twinpalms.com. To view more of Debbie Fleming Caffery's work ' including images from Polly ' visit www.debbieflemingcaffery.com. "Polly and Her Chicken, May 1996" is provided courtesy of Twin Palms Publishers.