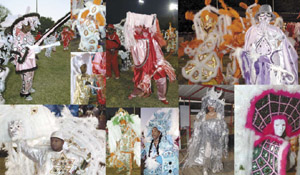 On Mardi Gras day, some of Acadiana's best-kept secrets are revealed.

Since 1998, the most spirited and talented keepers of Lafayette's African-American Mardi Gras traditions proudly wear their handmade costumes for a judged competition on Fat Tuesday. After spontaneously battling for neighborhood bragging rights in late-morning gatherings around 12th Street, the action moves to Clark Field, where zydeco and Mardi Gras music fuel a raucous celebration and friendly competition between local maskers and costume makers.

Perry is referring to the tradition of Mardi Gras box hats unique to Lafayette; the flat hats are made of cardboard covered with swaying fringe that moves with every step. Masks can also be cut from screen and painted to help disguise the identity of the masker.

They complement a dizzying array of costumes made with feathers, lace, bells, bows, and silk and satin fabric ' all sewn by hand. Each masker's costume and colors is a closely guarded secret, never to be revealed until Mardi Gras day. The winner of the Clark Field competition then has a year to plan and make their next costume and defend the crown in 2008.

The Mardi Gras Show at Clark Field takes place from 10 a.m. to 9 p.m., Tuesday, Feb. 20. Admission free for children under 12 years; $2 donation for adults. In addition to the costume judging contest,

Step Rideau and the Zydeco Outlaws, Northside High Drill S.Q.U.A.D and Sha Me Nu and the Zydeco Drifters will perform. No ice chests or large bags allowed. For more info, visit mardigrasshow.com.