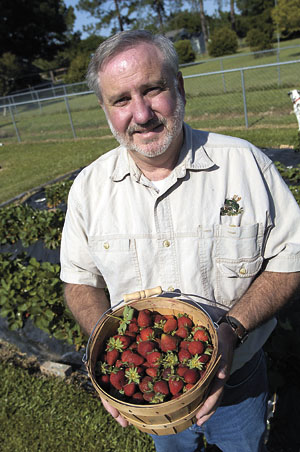 A lot of people around here have cucumbers, tomatoes, bellpeppers, banana peppers or okra, but you don't hear of many people having a strawberry patch," says Betty Lavergne. She and her husband Dale inherited more than 100 strawberry plants when they purchased their house on the outskirts of Opelousas last year. The previous owner was an avid gardener, and the strawberries were already blooming with white flowers when the Lavergnes moved in. "Last year we just harvested," Betty says. "We didn't do the work. We just got the pleasure."

Spring is prime strawberry time in South Louisiana. Planting is recommended during November and December, and the deep green leafy plants begin producing their fruit in March, April and early May, depending on the weather. "As soon as the heat hits it, they're done," says Dale. After enjoying the berries last spring, the Lavergnes pulled up all of the plants and replanted the patch in mid-November. They ordered 100 strawberry plants from Jim's Nursery in Opelousas, thinking roughly 60 would survive. They only lost two during the winter.

Planting the strawberry patch wasn't too much work for the couple. "We tilled each row and put some fertilizer down, and then covered it with the paper and just planted them," Betty says. The garden is located in direct sunlight in the back of the yard and is four rows deep and covered with black plastic to keep the soil moist. (A row of tomatoes and peppers make up the fifth row of the garden.) The Lavergnes sprayed the plants once with fruit spray and added fertilizer twice, but have otherwise left them alone. The most time-consuming part is picking the berries. Betty picks about a gallon in the mornings every other day.

Jim's Nursery owner Jim Briley has been selling strawberry plants for more than 30 years and recommends planting the berries 10 inches apart and adding mulch to the beds. Briley suggested two different varieties of strawberries to the Lavergnes: Camerosa, a newer variety from California that produces large, sweet berries early in the spring, and Chandler, an older variety with slightly smaller berries and later production. Even though they planted two rows of each, the Lavergnes can't tell the difference. "When they first started producing, we did a taste test and I couldn't tell," Dale admits. Judging from the Chandler rows, it looks like they might outlive the Camerosas by a few weeks.

Two weeks ago, the strawberry plants were still brimming with huge, red berries, and some still held a few flowers. But with summer heat approaching, some of the plant's bottom leaves have already begun to turn brown, and the berries aren't as sweet as they were a month ago. The Lavergnes say they've yielded several flats of fruit this season. "I put them in the freezer, and then we make strawberry shortcake," Betty says. "But mostly we just kind of give them away, because they're better fresh than frozen." Dale, a salesman at TriStar Graphics, also brings them to his clients.