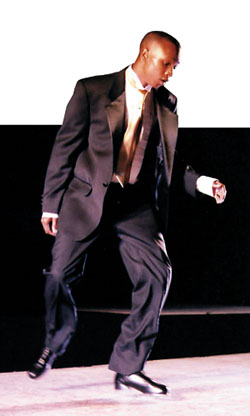 This week's upcoming performance of Tap City, a showcase of the best dancers of the annual New York City Tap Festival, is bringing local dance aficionados out of the woodwork and reviving a spirited art form that holds a special place in Lafayette's dance history. "It was a big part of dance in Lafayette," says Elaine Mann, who owned Elaine Mann School of Dance in Lafayette for 38 years and taught dance for more than 50 years. "At that time, we taught three subjects: tap, ballet and acrobatics," she says.

Tap was Mann's favorite dance form because of its energy and movement. "I just liked everything about it," she notes. "My feet are always going to tap. I just feel myself being up there."

She remembers taking lessons and dancing with Dwight Andrus Jr. ' yes, the real estate developer ' who's a local tap legend among dance enthusiasts. "I did tap a lot," says Andrus. "That's a fact."

Andrus' granddaughter, Ashley Andrus, remembers her grandfather teaching his 14 grandchildren how to tap dance when they were young. "He actually had one of the rooms (in his house) redone with a wooden dance floor and mirrors on the wall," she says. Andrus began dancing at the age of 3, when his mother put him in dance lessons with aspirations of seeing her son on Broadway. (He did get an offer to study in New York at the age of 13 but turned it down to stay in Lafayette.) Andrus also taught at Gertrude Leblanc's dance school and often performed at the Heymann Center and in outlying areas before going to college.

Tap City founder, producer and director Tony Waag is excited about his first visit to Lafayette ' and collaborating with local musicians, including zydeco band Lil' Nathan & the Zydeco Big-Timers. "I think everybody's totally open to that," he says. "If there's music, there's dancing. They'll probably just play and ask us to jam. We really consider ourselves musicians anyway ' we just play our feet." (For a complete list of Tap City events, see p. 24.)

In its fifth year, the annual summer Tap Festival brings together hundreds of tap dancers from around the world. This summer marks the event's first national tour, which includes nine of the best dancers from the past five festivals, along with three musicians on piano, drums and bass. It also represents three generations of tap dancing; Waag studied under tap dance trailblazer Brenda Bufalino, who will be dancing in the show.

"It is sort of a best-of and represents different facets of the festival pulled into one show," Waag says. "The biggest thing is that we represent a variety of styles, types of music and eras." From early Singin' in the Rain-inspired moves to bebop tap, softshoe, funk, Broadway, and Brazilian and German variations, Tap City clicks in a whole spectrum of styles. "It's exactly like music," Waag says. "It's an ongoing formation of things.".