A live performance by saxophonist Dickie Landry marks the release of his new compact disc and kicks off this season's Louisiana Crossroads music series. 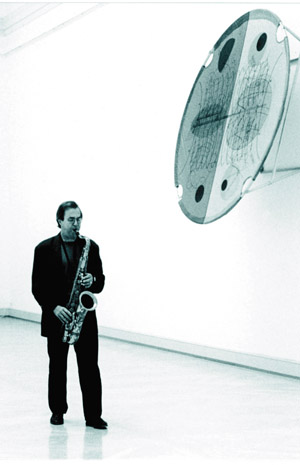 Landry's worked hard at being something. He co-founded and performed with The Philip Glass Ensemble from 1969 to 1981, for what he calls "11 repetitive years." Landry went on to work with Paul Simon, Talking Heads, Laurie Anderson, Robert Rauschenberg, Bob Dylan, Lawrence Weiner, Lil' Band O' Gold, Gordon Matta-Clark and True Man Posse.

In 1974, Landry began utilizing a delayed effect in solo saxophone performances. With four speakers set up in the corners of a room, the first produces Landry's live playing. The remaining three also produce the sound but are delayed so that they sound off in succession, producing four different sets of saxophones from one horn. "I improvise around the melody and always come back to it," Landry says. "It's like Indian singing, like a raga. You state the raga and then you go on and improvise around that structure, and hopefully it works. Sometimes it gets out of hand, but the thing about the delay is that if you start something you don't like you can always change by the time it comes back to you."

Landry's new CD, Solo, complete with reproductions of his own art, contains only three tracks, but runs more than 40 minutes long. It's his first release since 1978. Opening track "12 saxophones" was recorded in Dr. Tommy Comeaux's studio shortly before his death in 1997. The 11 minute-plus track uses three delays on the saxophone on three different layers to produce the audible illusion of a dozen saxophones performing at one time.

In the second piece, "Ghosties," Landry puts down the sax and takes up a Roland D-70 synthesizer for an 8-minute meditation of sparse notes, breathing slowly in and out. The number was recorded in New York in 1986 at the New York studio of fellow Glass alum Richard Peck.

But the best moments on Solo are saved for the last. "St. Gallen" clocks in at over 21 minutes and is reminiscent of Landry's quad-solos. The difference is that the delay is natural. In 1994, Landry played for the opening art exhibit of visual artist and Mamou native Keith Sonnier at the Kunstmuseum in St. Gallen, Switzerland. In a large rectangular room with a domed glass ceiling, Landry was able to replicate his quad-solo without speakers. "St. Gallen" is a testament to not only Landry's keen ear for reverb, but his ability to see it as more than a by-product of sound and to harness it as part of the music.

No small feat for the 67-year-old Landry, who has no intentions of being nothing anytime soon. "It's like a marathon runner who runs," he says. "If he gets to the finish line, and he's panting, he doesn't need to run anymore. So no, it's not getting harder. It's getting easier."

A quadrophonic saxophone performance by Dickie Landry kicks off the seventh season of Louisiana Crossroads, with the first musical event for the series in the main gallery at the Acadiana Center for the Arts, Thursday, Sept. 21 at 7 p.m. Tickets are $10 in advance, available at the ACA and www.louisianacrossroads.org. Admission is $12 at the door and discounts for members, students and seniors are available. Copies of Solo will also be available. Call (337) 233-7060 for more info.