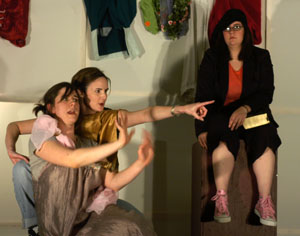 Othello becomes a rap song, and Shakespeare's medieval history plays are compressed into a game of football. In The Complete Works of William Shakespeare: Abridged, on the boards at the Acadiana Center for the Arts through April 16, all of the bard's works from Hamlet to Macbeth to Romeo and Juliet are impressively and humorously compressed into two acts ' simultaneously poking fun at the seriousness of his works and rewarding Shakespeare buffs with plenty of intellectual jokes.

Carol Ross commissioned the piece from Acting Up With Amy Waguespack for the Friends of the Humanities biannual fundraiser in March. Waguespack decided to make it her spring production, and the play is the first major piece of theater to be performed in the ACA.

The script calls for a three-person cast, so Waguespack alternates boy and girl performances and mixes things up with a co-ed performance one night a weekend. The actors move in and out of their Shakespeare roles, with some improvisation in between. And the audience participates in many scenes, either as a whole or as individuals pulled from their seats. "Audiences shouldn't be afraid of it," Waguespack says. "I almost guarantee by the end, they'll be totally caught up in it."

Ross saw the piece performed many years ago in an off-Broadway production. "I always wanted to have a Shakespeare company in Lafayette and see that production in Lafayette," she says. She approached Waguespack because of Acting Up's annual Summer Youth Shakespeare Ensemble camp for children; Waguespack says Ross felt the piece was a great way to introduce people to Shakespeare. "She just wanted to make Shakespeare fun, so that when we do Macbeth in the fall, maybe people would come see the actual Macbeth," she says.

The script for The Complete Works of William Shakespeare: Abridged was written nearly 20 years ago by Adam Long, Daniel Singer and Jess Winfield. The trio has also done similar treatments of the Bible and world history. "It's a way of finding humor and making accessible things that kind of seem to big to deal with," says Waguespack. "If you love Shakespeare, you're going to laugh, because you're going to get all the references. But if you don't or you have this resistance to Shakespeare, it could change your mind."

The Complete Works of William Shakespeare: Abridged will be performed Thursday-Saturday through April 16 at 8 p.m., with an additional midnight April 2 performance, at the Acadiana Center for the Arts. Tickets are $15 for adults and $10 for students and seniors and are available at ACA. Call 523-5581, 739-4273 or 233-7060 for more info.