Screening the second annual Cinema on the Bayou film festival. 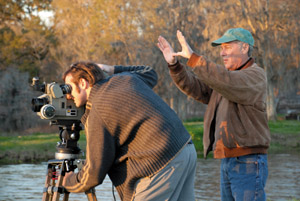 It took a hurricane to blow filmmaker Pat Mire back to Lafayette from his studio in New Orleans. In Katrina's aftermath, Mire realized there was no more time to waste regarding the Acadiana film festival he'd envisioned for nearly a decade. The Cinema on the Bayou Film Festival was born on the run last spring, with screenings and panel discussions in venues from Cité Des Arts to the Little Flower Auditorium in Arnaudville. The successful debut of Lafayette's first independent film festival is generating a much larger showing this year ' more than 40 films on five screens with a healthy mix of features, documentaries and shorts.

This year, Cinema on the Bayou kicks off Wednesday, May 23, with the Louisiana premiere of Little Chenier, directed by Bethany Ashton Wolf. Written by the sister-brother team of Lake Charles natives Wolf and Jace Johnson, Little Chenier tells the story of two brothers, Beauxregard and Pemon Dupuis, and their struggles to live the life they choose in the bayous of southwest Louisiana. Little Chenier won Best Film in the 2007 Phoenix Film Festival and Audience Favorite ' Best Impact of Music in a Feature Film in the 2007 Park City Film Music Festival. New Orleans actor Mark Krasnoff, known for his roles in Belizaire the Cajun, The Big Easy, Glory Road and The Thief, played the role of Jim in Little Chenier. Krasnoff committed suicide on Sept. 16, 2006, a tragedy directly related to the aftermath of Hurricane Katrina. The screening is dedicated to his memory.

Another showcase of the five-day festival is Willie Francis Must Die Again, directed by Allan Durand. Danny Glover narrates the story of Francis, who survived execution in the electric chair in 1946, only to have the U.S. Supreme Court vote to allow a second execution. Morristown, meanwhile, is a working class perspective on globalization directed by Anne Lewis and scored by Dirk Powell. The final day of the festival is a day-long event, Jazz Sunday, screening 13 documentaries including a seven-minute short called Time for a Change, featuring late New Orleans "Siren of Soul" Timothea and dedicated to filmmaker Stevenson J. Palfi, another Katrina-related suicide. Closing the festival is Jim Gabour's documentary Flow: Living in the Stream of Music, following New Orleans composer/trumpeter Terence Blanchard as he performs on four continents. The film is up for a 2007 Grammy for Best Music Video.

For more info about schedules, venues, ticket sales and detailed descriptions of the films, go to www.cinemaonthebayou.com.