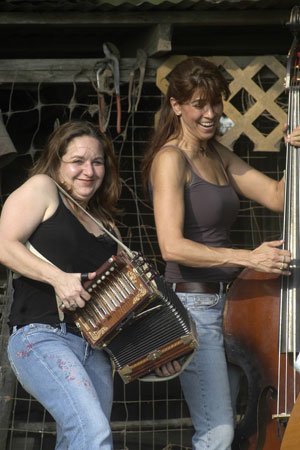 Women have always played an important role in Cajun music's history, from early Acadian ballads originally sung by women to Cleoma Breaux Falcon's playing with her husband Joe on "Allons à Lafayette," the first Cajun recording. However, for much of the 20th century the genre was a man's world.

"In years past, it wasn't in good taste for them to play in dancehalls, but women grew up in homes watching and listening to their brothers and fathers playing Cajun music and they too learned to play," says Michelle Leder of the Cajun French Music Association.

Starting in the 1970s, with Sheryl Cormier forming the first all-female Cajun band, women have increased their presence in Cajun music. Today, all-female bands such as the Magnolia Sisters and female-led bands like Kira Viator & Bayou Beat are forging their identities.

"Young women today feel free to follow their interests, and the number of talented women musicians publicly playing music is growing," says Leder. "It is very important that they have the same opportunities as men to play, perform and spread the music and culture to the rest of Acadiana and the world. We need to spotlight these talented women ' seasoned and new musicians. We need to provide them with the opportunities to express their creative talents. We need to let them know that we are happy and proud that they have chosen to hold on to the French music, the Cajun French language and the Cajun culture. The women playing today are the next generation's role models."