The motion calls for the lawsuit (and an appeal of the misdemeanor conviction) to be "dismissed with prejudice," and was received by the civil records division of the Lafayette Parish Clerk of Court's Office in an Aug. 29 fax submitted by Stewart's Baton Rouge-based attorneys, Christopher Alexander and Stephen Spring II.
Stewart's lawsuit is the result of an altercation during Mardi Gras 2012, when he was arrested by the Lafayette Police Department for throwing a knockout punch to the face of mother/school teacher Erin Fitzgerald - the daughter/stepdaughter, respectively, of IND Monthly co-publishers Steve May and Cherry Fisher May.

That punch landed Stewart in the courtroom of 15th Judicial District Judge John Trahan, who in June convicted the former radiation oncologist of misdemeanor simple battery and sentenced him to a six month suspended jail sentence, a $500 fine and a year of supervised probation. Trahan's sentence also requires Stewart complete a class in anger-management. 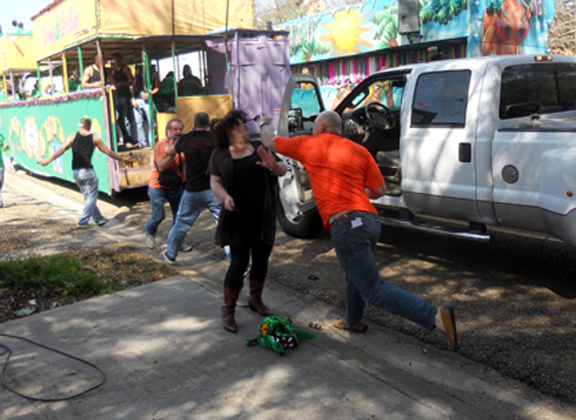 A photo taken by a witness shows Glenn Stewart in the act of launching a punch into the face of Erin Fitzgerald. Fitzgerald's stepfather, John St. Julien, can be seen behind them tussling with one of Stewart's employees. Stewart claimed in a police statement on the day of the attack that he accidently punched Fitzgerald while trying to hit St. Julien - a statement Judge John Trahan flatly called "a lie." The scissors Stewart later claimed Fitzgerald brandished as a weapon are in her right hand, held casually with the blades palmed and the plastic handles exposed.

Other damages allegedly suffered by Stewart, according to the suit, include "past, present and future medical expenses" arising from "physical pain and suffering, mental anguish and anxiety, lost wages and diminished earning capacity, emotional distress, loss of enjoyment of life, embarrassment and humiliation, loss of consortium and physical disability."

On Tuesday, 15th Judicial District Judge Marilyn Castle granted the motion from Stewart's lawyers calling for the suit's dismissal. Also granted during Tuesday's hearing was a motion from LCG's attorney Michael Corry calling for sanctions against Stewart's lawyers (read more about them here). Corry has 10 days to submit an affidavit listing his attorney's fees, and according to the clerk's office, that will determine the amount in court sanctions levied against attorneys Alexander and Spring.