The Hurricane Poster Project opens a special exhibition at the Old State Capitol on Aug. 29. 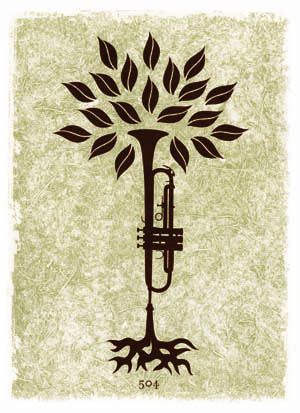 San Diego graphic artist Josh Higgins got an e-mail out of the blue last fall from Colorado design firm owner Leif Steiner, asking if Higgins was interested in designing a poster for a special hurricane relief project. "I thought it was a little odd, because I'd never met him and didn't know who he was," says Higgins. "This could be a hare-brained idea by some guy, or maybe he's on to something. But I thought it was a great way I could help out, and I thought, 'I'll go for it.'"

More than 150 graphic designers from around the country ' including from high-powered Seattle poster company Modern Dog ' had the same reaction. They created visually stunning, provocative works of art resonating with palpable emotion, ranging from sheer anger to quiet hope. The posters were offered for sale in signed and numbered limited-edition pressings through the Web site www.thehurricaneposterproject.com, with proceeds going to the Red Cross and other relief organizations. The project was slated to end earlier this spring, but the overwhelmingly positive reaction to it kept it going. "We've had at least two calls from people who lost their houses and bought posters and said it was going to the be first artwork they'd put up in their new house," says Steiner. "The reward for us is all the people who've been touched by this. And it's been amazing to see the design community as a whole rally behind us. Some of these were expensive to print, and the designers put up a lot of their own money to get these printed and send them to us." To date, the project's raised almost $40,000, and now 30 of the posters are en route to Baton Rouge, where they'll be on display beginning Aug. 29 at the Old State Capitol.

Higgins' poster (pictured) has been one of the most popular and quickly sold out of its first pressing. (It's now available in a second edition.) The 38-year-old designer is a former touring musician who spent time in New Orleans, inspiring him to put the uniquely Crescent City touch of the 504 area code in his design. "The feeling and the vibe was so unique when I was there," he says. "I wanted to capture that and also say New Orleans in a way that wasn't super-obvious. [The 504] actually makes people think about it even more."

To view or purchase posters from the Hurricane Relief Poster Project, visit www.thehurricaneposterproject.com or call (720) 304-7210. The Hurricane Poster Project exhibit opens at the Old State Capitol in Baton Rouge Tuesday, Aug. 29. For more info on the exhibit, call (225) 342-0500.