Despite decades of resistance, bridge has been economic boom for city.

on Lafayette over the past decade

It's been 10 years since the Camellia Boulevard bridge began serving as a passage from Johnston Street to Kaliste Saloom Road - for some it seems time flashed in a blink of an eye, while for others it's a memory of the decades-long struggle to pave a way from point A to B. The infrastructure project that came with much controversy and opposition has clearly helped the city expand and alleviate traffic congestion.

To celebrate a decade of the bridge, city officials and supporters gathered at Ruffino's on the River Thursday to hear City-Parish President Joey Durel speak about its impact on Lafayette. "This bridge created economic development ... in time the economic development will more than pay for the bridge," Durel said. For example, before the bridge was developed, the land around it generated $700 annually in property tax and today averages $2.4 million, he noted.

But, to Durel, there's a bigger issue at hand than dollar signs: the 35,000 cars utilizing the bridge daily. "That's 35,000 more cars that would be on Pinhook or Ambassador Caffery every day," remarked Durel. "We think we have a traffic problem, but there are some cities that would love to have the traffic we have."

It's next to impossible to imagine what south Lafayette traffic would be like today without the bridge, but one thing is certain: River Ranch, commercially and residentially, would be nowhere near the success it has been. And that means there would be no Ruffino's on the River.

In a fitting celebration of the bridge, a ribbon cutting was held at  the restaurant, which opened this spring. The restaurant is the latest business to call Camellia Boulevard home, and to owner Ruffin Rodrigue there's no better place than alongside the river.

Durel did acknowledge that the bridge's 10-year contribution hasn't solved all of south Lafayette's traffic woes - no single infrastructure project can do that in a growing city like Lafayette. "In traffic, I grit my teeth with a smile," he said. 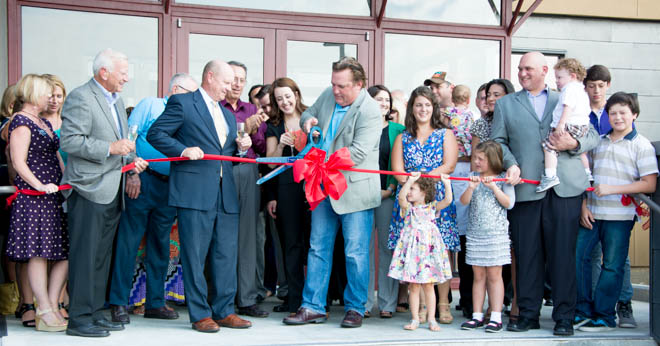 Ruffin Rodrigue cuts the ribbon at Ruffino's on the River in conjunction with Thursday's
celebration of the Camellia bridge's 10th anniversary.