BeauSoleil celebrates its 30th anniversary with a pair of special retrospective shows. 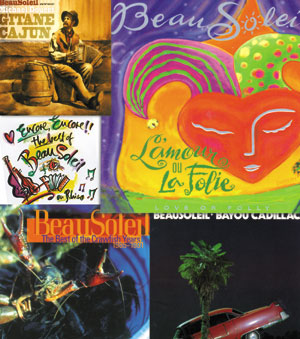 From an unlikely launching pad ' a free gig at the Bon Temps Rouler Club in Holly Beach in 1976 ' BeauSoleil has since won multiple Grammy Awards, played presidential inaugurations and a Super Bowl halftime show, and been a regular guest on Garrison Keillor's Prairie Home Companion syndicated radio show. Simply put, BeauSoleil is the most recognized Cajun band in the world and has been one of Acadiana's greatest ambassadors for three decades. Next week, the group stages a pair of special retrospective shows in Lafayette and New Iberia that will feature songs from every album the band has recorded.

"As we got together to jam and talk about this upcoming tour and recording," says fiddler Michael Doucet, "we all realized how much fun we have enjoying each other's company. We talk about songs, play new ideas, listen to old recordings and then just say, 'Yeah, that's not bad' and bring it all into the studio where we play better than ever and can laugh at it all as BeauSoleil continues to create its own legacy." (Read an extended interview with Doucet.)

While the band continues to be one of the most progressive ensembles around ' incorporating everything from Caribbean, Hawaiian, blues and gypsy-jazz elements into its sound ' it also remains true to its roots. In its recordings and live performances, Doucet and guitarist David Doucet, accordionist Jimmy Breaux, bassist and multi-instrumentalist Al Tharp, percussionist Billy Ware, and drummer Tommy Alesi never fail to acknowledge and pay homage to their mentors. That part of their mission resonated deeply as Doucet and the band combed through their back catalog to prepare for their 30th anniversary shows. "Some of the songs were learned directly from the source, like Dennis McGee and Canray Fontenot, who are no longer living," he says. "That kind of puts things into perspective."

BeauSoleil plays the Sliman Theater in New Iberia on Wednesday, Jan. 11 and Vermilionville on Thursday, Jan. 12 as part of the Louisiana Crossroads concert series. Showtimes are 7 p.m., and tickets are $15. For more info or tickets, call the Acadiana Arts Council at 233-7060 or visit www.LouisianaCrossroads.org.