After a number of disturbing events and a three-year hiatus, acclaimed Lafayette rock band Santeria returns to the studio and stage. 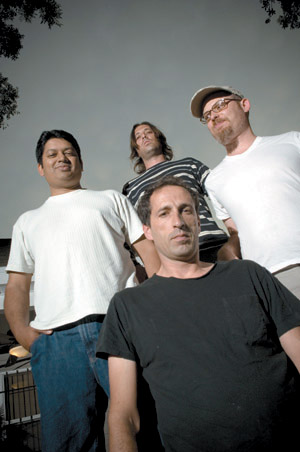 For the better part of a decade, the members of Lafayette rock band Santeria toiled under what they saw as a curse. Their lives took a bizarre turn when they started getting threatening messages from angered practitioners of the religion that bears the same name, and one night, someone dropped a cow heart ' resembling a football made of meat ' in their mailbox. Convinced the rosary made of human bones he wore also had something to do with the band's troubles, guitarist Primo pitched it into the dark swamp waters of Morgan City.

"I guess when you play with that dark energy it can roll around on you," says Santeria frontman Dege Legg.

Morale flagged as the band struggled to land a recording contract. "The band collectively, really aspired to make it," says Primo. "We got to the point where we were playing for those reasons." When a record deal didn't materialize, the members of Santeria agreed to take an amicable hiatus.

The hiatus took a devastating turn when drummer Krishna Kasturi broke both legs, an arm and an ankle in a car crash in Florida. For the last three years the members splintered further; Kasturi stayed in Florida, and bassist Jay Guins moved to New York, while Legg (an occasional Independent Weekly contributor), Primo and percussionist Rob Rushing stayed in Lafayette.

This August, Kasturi sparked new life into the band. He hadn't been on a drum kit since the accident, and his itchy fingers beckoned Santeria back in the studio. Working with new bassist Chad Willis and recording engineer Ivan Klisanin, they started work on a record and recently played a last-minute reunion show at the Renaissance. December has them playing at least four more gigs as they prepare for the early 2007 release of the record, tentatively titled The Year of The Knife. Legg notes it's pure rock 'n' roll, and songs that didn't fit onto past Santeria albums will join new material written by Legg that is too strong for his other band Black Bayou Construktion.

As for any return of the curse, Primo isn't buying it.

"I refuse to believe it," he says. "Because the moment you buy into it, you're sold. We are doing the record for positive reasons."

Santeria performs Friday, Dec. 8, with Rotary Downs and Black Bayou Construktion at 307 Downtown and Friday, Dec. 15, with Attractive & Popular and the Transmission at Renaissance. For more info, visit myspace.com/santeria777.