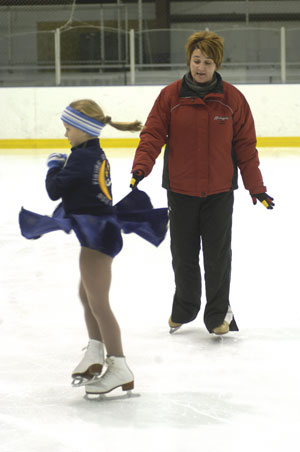 t can be 70 degrees outside, but the ice inside Louisiana Hockeyplex in Carencro is always about 20 degrees. "It's not a seasonal thing for us," says Figure Skating Director Crystal David. The rink's "I Learn to Skate" figure skating school is held year-round and has about 50 students for the winter session, ranging from ages 4 to 60. The students (including Chelsea Allemond, pictured) meet weekly for eight weeks, learning basic skills like gliding, crossovers and how to stop and turn. They can eventually progress up the ranks to execute double axels and triple lutzes.

When David came to Louisiana Hockeyplex in 2001, the rink only had hockey and public ice skating. "I've been working hard building the school and figure skating in Louisiana," she says. She began skating at the age of 4 while growing up in New Orleans and met Patricia Cook, current president of the Figure Skating Club of New Orleans. In those days, New Orleans had several ice rinks and a hockey team, which is necessary to generate money to pay for the ice ' and skating. Cook says when the New Orleans Brass left, the ice left with it, and she had to move the club to Carencro. "You have to have a home rink to remain a member [of U.S. Figure Skating], so after Carencro opened we would skate in Carencro even though the club is from New Orleans," she says. "New Orleans hasn't had any ice for several years."

Before Hurricane Katrina, Cook traveled the country from her home in New Orleans to skate and visited her coach once a month in Jackson, Miss., for private lessons. Her evacuation from New Orleans to her sister's home in Maurice was bittersweet. "I haven't skated at all since I'm here because of trying to move," she says. "But I'm closer now to the rink than I ever was."

Ice skating starts heating up in Carenco and across the country each January, which is National Skating Month. "When you start getting into winter, people start thinking about it. It's also an Olympic year," explains David.

Adds Cook, "It's recreational but it's a goal-oriented activity, and students can progress up the ranks just like Olympic competitors."