Tracing the history of Mardi Gras in Eunice. 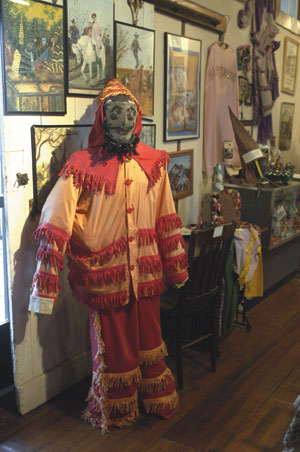 The first mention of Mardi Gras in Eunice dates back to 1896 in the Crowley Daily Signal. "Some Mardi Gras [riders] had come to town and made mischief for the merchants of Eunice," says Georgie Manuel, who, along with her husband Allen, puts together an exhibit of Cajun Mardi Gras masks and costumes at the Eunice Depot Museum each year. "Two years after Eunice was settled there was Mardi Gras," she continues. How Mardi Gras or the traditional screen masks worn by the locals got to Eunice remains a source of mystery. "It's like it's indigenous to this little area right here," she says.

Authentic Cajun Mardi Gras Costumes, Masks & Traditions features costumes from the 1940s and '50s and a variety of masks, some dating back to the late 1800s. Two captain's capes hang on the museum's wood wall, one pink with "Captain" written in gold, the other less extravagant in orange and black with a wide sailor-like collar. The pink cape belonged to Nelson Godeaux and the black and orange one to Hillman Smith. "Hillman was a throwback to the early Mardi Gras in Eunice," says Manuel. "He passed away recently and had been doing it for 70-80 years. Nelson worked with Hillman."

While captains wore the traditional cape and capuchon ' tall pointed hat ' the rest of the Mardi Gras participants made their own colorful costumes trimmed in fringe. Disguise was the main function of the outfit, and some screen masks in the exhibit are trimmed with hair for eyebrows and mustaches.

Cajun Mardi Gras costumes haven't evolved or changed much over the years. "It's still the fringed costume, pajama-like, made out of feed sacks and leftover work clothes," says Manuel. "There was no color combination. There are no standard colors in Cajun Mardi Gras. We couldn't afford to have colors." The screen masks were available in catalogs around the country, possibly for Halloween, and were available for sale in Opelousas, says Manuel. Her guess is that locals couldn't afford them and made their own.

There's no official written history of Mardi Gras in Eunice, but the exhibit includes an account by fiddle player Napoleon Fruge, who claims he started Mardi Gras in 1910, because he was the only one who could sing the songs. While Fruge's claim should be taken with a grain ' or a full shaker ' of salt, his descriptions of costumes, masks and Mardi Gras roles still ring true today. "The captain of each Mardi Gras group would walk across the field with their white flag on a bamboo cane, but always with discipline and respect," he wrote. "The captain is and was boss."

The Eunice Depot Museum is located at 220 S. CC Duson St. in Eunice. Authentic Cajun Mardi Gras Costumes, Masks & Traditions will be on display through March 31. Call 457-6540 for more info.