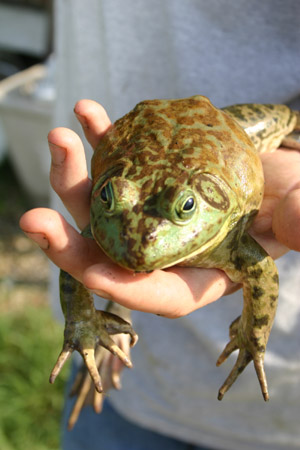 Most 14-year-olds resort to a movie when they have trouble sleeping at night, but Steven Thrower's dad doesn't mind when Steven slips out the house after midnight and returns about 4 a.m. ' as long as he comes home with a pillowcase stuffed with live bullfrogs.

Steven and his friend Chris Villarreal have been frogging together all summer in Bayou Tortue in St. Martin Parish. "I've been frogging since I was 8," Thrower says. The pair hunt in a boat or wade on foot in the shallow swamps along the bayou. "We take this big 10 million candle power spotlight," Chris says. "It blinds the frog." With Chris shining the spotlight, Steven sneaks up on the bullfrog and throws a dip net over him. Then he grabs it by the hind legs so it won't leap away and stuffs it into a pillowcase.

"Sometimes we bring them home and put them into an aquarium," Steven says. "Sometimes we clean them and eat them. Right now we have two in my granny's bathtub. But we're going to let them go."

"It weighed 4, maybe 5 pounds," Steven adds. "We shined the light on him, and Steven was going to get him, but then a little tree frog jumped right between his eyes, and he jumped away. We only caught these two."

The boys came home from frogging and took a long nap before they went fishing that afternoon in Bayou Teche. "We went where they caught that piranha last week," Chris says. "They have bull sharks in the bayou too," he continues. "I've been wanting to catch a shark, but we didn't have enough string."

For those who don't want to catch their own bullfrogs, the Rayne Frog Festival will be held Sept. 8-10 at the Rayne festival grounds, just off I-10. Activities include frog racing and jumping contests, the Frog Derby and a Frog Cooking Contest. For more information call (337) 334-2332 or visit www.rayne.org.