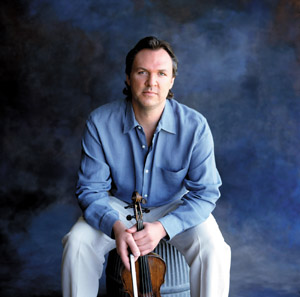 Violinist Mark O'Connor first met trumpeter Wynton Marsalis at the closing ceremonies of the 1996 Olympics, sparking an unlikely musical friendship. In a recent tour diary, O'Connor writes of meeting Marsalis at a New York City sushi restaurant on the eve of a 2003 O'Connor performance at Lincoln Center. "I presented him the music I wrote out, and he looked it over during the meal," notes O'Connor. "Then he asked if we could try it out. I said, OK, when would you like to? He replied, 'How about now?' ... He pushed back the chair from the table and grabbed his trumpet. I took out my fiddle, and we had a little rehearsal smack in the middle of the sushi restaurant in Midtown!"

The anecdote is vintage O'Connor and indicative of how highly he's respected by his peers in a wide cross-section of American music. In his sweeping career that spans more than three decades, O'Connor's gone from winning bluegrass fiddling competitions to collaborating with the likes of cellist and classical icon Yo-Yo Ma, guitar legend Les Paul and jazz vocalist Jane Monheit. Whether he's scoring concertos or paying homage to the timeless 1920s Parisian swing of Django Reinhardt and Stephane Grappelli, O'Connor always makes music that's both sophisticated and refreshingly accessible.

Perhaps no project embodies that O'Connor trait like his Appalachia Waltz Trio, which the violinist brings to Lafayette this Sunday and Monday; O'Connor introduces new ideas and energy to mountain music without losing sight of its hardscrabble roots. Expect a number of Acadiana's best fiddlers in the audience, and with O'Connor's penchant for spontaneous jam sessions, there might be a few surprises in store.

Mark O'Connor's Appalachia Waltz Trio plays the Heymann Center at 7:30 p.m. Monday, Feb. 5. Tickets are $6-$41 and available through www.ticketmaster.com or by calling PASA at 237-2787, or visiting www.pasa-online.org. O'Connor will also lead a fiddle workshop at 4:30 p.m. Sunday, Feb. 4, at the Acadiana Center for the Arts. Workshop admission is $20, or free for ticket holders to O'Connor's Monday night performance.