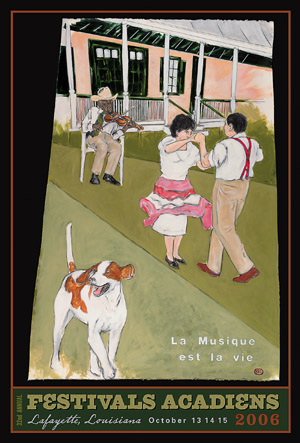 Planning a festival in south Louisiana is like taking aim at a moving target. Will it rain? Will it be too hot? Will a hurricane rip through town that weekend?

In 1976, the Tribute to Cajun Music (a three-hour concert started by the Council for the Development of French in Louisiana in 1974) moved to Girard Park from its Blackham Coliseum birthplace. Originally held in March, it joined the Louisiana Native Crafts Festival (then held at the former Natural History Museum & Planetarium) in the second weekend of September as a way to kick off fall. In 1977, The Bayou Food Festival (then held at the Heymann Center) merged with the two, yielding the plural Festivals Acadiens.

The years have been kind to Festivals Acadiens. Lafayette Convention and Visitors Commission Director Gerald Breaux notes the event has rarely been called off for rain, and only once was it impacted by a hurricane, resulting in a week-long postponement over a storm that never came.

But there were always the last waves of summer heat and a dust cloud kicked up from dancers stomping on dry ground. After 29 years of September Festivals Acadiens, this year it jumps to the second weekend in October ' a permanent move.

"When the thought that the second weekend in October might be a bit cooler and more inviting, all components got together and agreed to the change this year," says Breaux.

Every Festivals Acadiens is special, with south Louisiana bands coming off the festival circuit and making return appearances at home, plus the pride involved in playing the festival that did so much for Cajun music. This year will always be remembered as the first year the temperature dipped a little more and the dust wasn't quite as bad, but the food, music and dancing we all love about Festival Acadiens stayed the same.