Lil' Band O' Gold and friends get together for a special seasonal gig. 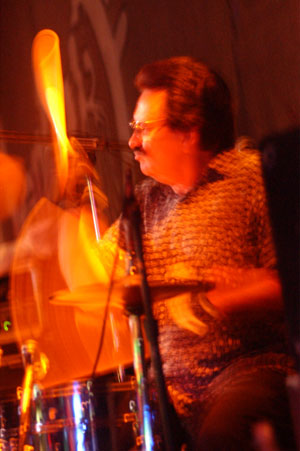 When the band takes the stage next week at Nitetown for its Please Come Home for Christmas show, the usual suspects will be in attendance ' Adcock on guitar, Warren Storm on drums, Steve Riley on accordion, David Egan on piano, Richard Comeaux on pedal steel, and Dickie Landry and Pat Breaux on saxophones.

But there will also be other familiar faces sharing the spotlight. "It's a Lil' Band O' Gold gig," Adcock says, "but a bunch of our friends, who are also musicians in this town, are invited to come in and sit in on it ' like Lil' Buck [Sinegal], Jude and Curley Taylor, Sonny Landreth, and Marc Broussard." Look also for Kenny Bill Stinson on bass, sitting in for Dave Ranson.

Lil' Band O' Gold's performances this past spring in New Orleans at the Jazz and Heritage Festival and at the Breaux Bridge Crawfish Festival were filmed as part of a BBC documentary film on the band that's currently in production. With the release of the film, Adcock hopes that the band will also release its long awaited followup to its self-titled, 2000 debut on Shanachie Records. "Now that there's the film project," Adcock says, "there's new life in the record deal."

And although he can't remember the last time the band played Lafayette, Adcock says he's not the least bit concerned about the band's upcoming show. "That band always sounds great," he says. "It's going to be a great night."