Twenty-five seasons ago, LSU's last-minute, upset win over Auburn caused an earthquake. Or so goes the legend...

[Editor's Note: A longer version of this story will appear in the October issue of IND Monthly.]

You don't want to see how the sausage is made. It's a letdown to see behind the curtain as the magician reveals his tricks. If you are an LSU 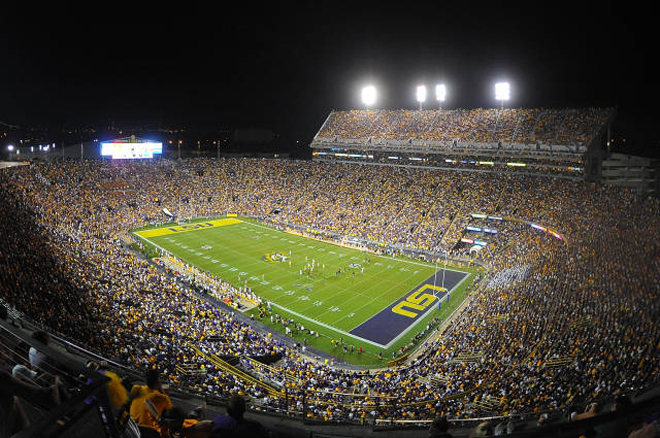 fan who puts the kids to bed with the tale of The Earthquake Game, stop reading now.

For those who don't know the punchy titles of LSU victories by heart - the Halloween Run, the Bluegrass Miracle - 25 years ago crowd noise from a Death Valley showdown between Auburn and LSU registered on a seismograph across campus. The tale landed on various sportscasts, lists of classic football moments, Ripley's Believe it or Not! and is among the university's self-proclaimed greatest moments. To Tiger fans, it is gospel. The earth moved Oct. 8, 1988. It didn't happen before and it hasn't happened since. It was The Earthquake Game. However, the quake might not be unique or as impressive as the legend holds.

On that night, the Tigers were down 6-0, trailing SEC rival Auburn. LSU had just lost two straight games and was hungry for an upset; NO. 4 Auburn wanted a purple and gold feather in its bid for a championship. With 1:47 left, LSU faced fourth and 10 at the Auburn 11 yard line. Quarterback Tommy Hodson hit Eddie Fuller in the end zone. The crowd erupted. Strangers hugged. Nearby residents fled their houses as a roar swept across town. Dormitory lights came crashing down in post-game mischief. A typical Saturday night in Death Valley.

The next day, Donald Stevenson, a geologist at Howe-Russell Geoscience Complex, noticed an increase in seismic activity at the exact time the referee's hands went up to signal the touchdown. (A later account by LSU claims Riley Milner found it Monday morning. Stevenson says he did not know him during his time at LSU.) Stevenson posted the reading outside his office as it was the first time a seismograph caught a football game. Before he left LSU in 1991, ESPN did a piece on it, calling it The Earthquake Game. A legend was born.

The key to the legend is proximity. The tale is the seismograph sat across campus. Stevenson puts the distance between the complex and the stadium at less than 500 yards. There, the Mark Products L-4 C Seismometer, about the size of a can of orange juice, sat on the complex floor. Both its closeness and it being on the floor and not buried increased the sensitivity of the seismograph.

After all these years, the seismogram Stevenson posted outside his office shouldn't seem like a big deal. It has grown into a beloved - and factual, yet exaggerated - myth.

"It was not big enough to have Mercalli Intensity," says Stevenson. "It was only recorded by that one instrument because the origin of the vibrations was located close by. If you look at a seismic record from any given day, depending on where the sensor is located, you may see signals produced by passing cars, trucks and trains. "