Bluegrass family sensation The Chapmans make a stop in Lafayette. 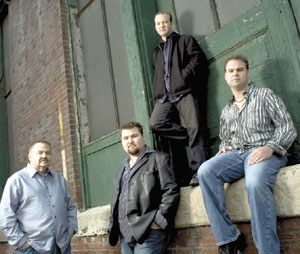 Chapman's fiddling ' he won the Colorado statewide junior division championship as a teenager ' inspired the rest of his family. His dad Bill started playing banjo, and his brothers Jeremy and Jason took up mandolin and bass. Now John's switched to guitar and sings more, and the Chapman family has become one of bluegrass' most formidable ensembles. They've earned accolades including the 1998 International Bluegrass Band Championship and the 2002 Emerging Artist of the Year Award from the International Bluegrass Music Association.

The band's first performance in Lafayette was last May, and its next gig on May 6 will kick off the musical season for the South Louisiana Bluegrass Association that runs through October. The Chapmans' fourth and latest CD, Simple Man, showcases the quartet's abilities to weave in and out of the traditional bluegrass sound ' full of haunting high and lonesome harmonies ' with a contemporary feel that would be a welcome addition to any modern country radio station.

"They have tremendous musicianship," Springer says. "Their ear for nuance on both instruments and vocals impressed me right away, and they've developed that even further over the last few years. They have a really great feel for how to make bluegrass interesting and exciting, to have a traditional bluegrass sound that's unmistakably bluegrass, but very nuanced. They do some great three-part harmonies, and their voices blend just beautifully. You can't really tell where one voice stops and another starts."

The Chapmans will perform at Acadian Village May 6, with the Louisiana Purchase Bluegrass Band opening the show. South Louisiana Bluegrass Association events are held the first Saturday of every month through October. Gates open at 3 p.m. for informal jam sessions. Shows start at 7 p.m. Admission for SLBA members is $7, $12 for nonmembers, and children 12 and under are admitted free. Campsites with hookups are also available; call 981-2364 for reservations. For more info about the South Louisiana Bluegrass Association, visit www.southlouisianabluegrass.org.