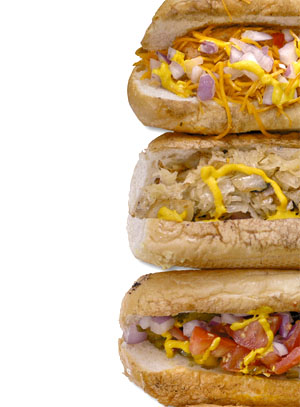 July is National Hot Dog month. The National Hot Dog Council estimates Americans will eat more than 7 billion hot dogs between Memorial Day and Labor Day. On the weekend of July 4, the biggest hot dog holiday of the year, 155 million dogs will be downed.

While Acadiana is better known for its hot links, lots of restaurants and drive-ins put on the dog. Hub City Diner takes hot dogs seriously, barking up six new designer frankfurters on a special menu that includes the Atomic Cajun Dog, doused in homemade chili, cheese and a jolt of jalapeno peppers. There's bratwurst in the Milwaukee Brat, Texas Corn Dog on a stick and the Chicago Cubbie Dog, which is "dragged though the garden" with mustard, sweet relish, chopped onion, peppers and fresh chopped tomato.

Other notable hot dog vendors in the region include Frosto in Crowley, Viator's Drive-In in New Iberia and the Huberville Grocery in Jeanerette, which buys its French bread buns from LeJeune's Bakery.

At Freezo, in New Iberia, you have to speak the lingo. A chili dog is just chili on a bun. Order a chili cheese dog, and you only get chili and cheese. You have to ask for a cheese dog (that's chili, cheese and a hot dog). Otherwise, they hold the wiener.